I have to admit, as much as I was looking forward to this day six months ago when I proposed the idea, it was really difficult to crawl out of my squeaky air mattress to get a shower at 7:30am.  And literally it felt like crawling.  The Airbnb was silent except for the sound of breathing from the dehydrated sinuses of several passed-out drunks.  Waking up these animals seemed like a bad idea.  Organizing ten hungover guys to catch a train which would jostle us two hours south to Neuschwanstein seemed like an even worse idea.  If we were even able to muster some enthusiasm, motion sickness would surely overcome us like a Walking Dead virus, leaving our train car full of vomiting pale-faced zombies.

These were just a few of my thoughts as I reluctantly turned the shower on in one of those ridiculous make-shift European showers with clunky folding doors overtop of a bathtub which do nothing but cocoon you into an immovable position.  So as I stood there wondering how I would raise my arms to shampoo my hair without flooding the tiny bathroom, I was preparing my wake up speech.

While I would like to say that I motivated the guys like Mel Gibson in blue face paint, it wasn’t quite as Type-A personality as that.  It was a bit more touchy feely, but it got the job done.  In fact the noise I had made getting up had already done half the work for me.  Not surprisingly we failed to catch the Plan A train at 9:30, but we did manage the Plan B one, 1 hour later.

So what exactly was I getting these guys into?  After two days of heavy drinking, it was time to continue drinking….  but with a little more emphasis on burning off the calories.  To fully appreciate what we were about to do, it might be helpful to read the Prologue.  The destination was the Neuschwanstein Castle.  The plan was not to visit the castle but to hike to it from the Tegelbergbahn.  By the time we boarded the train, spirits were high.  The sun was out.  Hangovers were managable.  Most of us had our anti-nausea counterbeer for the trip. 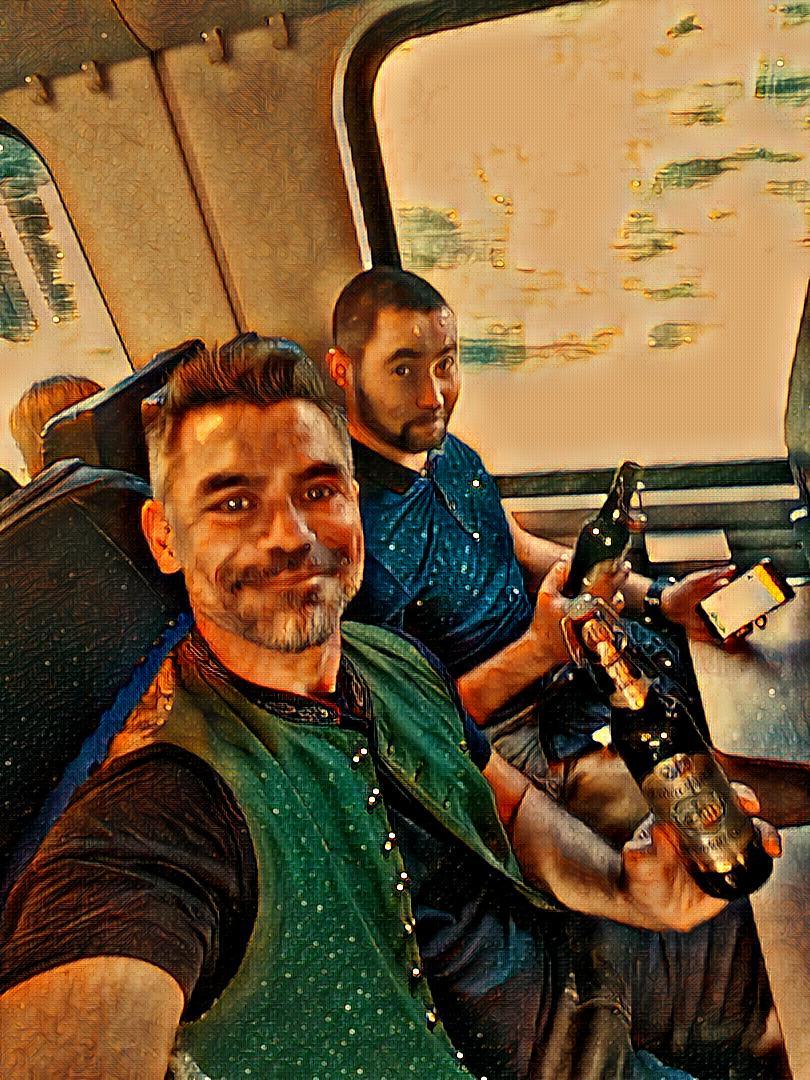 We rolled along admiring the beautiful Bavarian countryside.  You could see the nods of the guys silently acknowledging to each other that this was a good idea after all.  But a funny thing about moods.  They are quite fickle and the dark clouds that invaded the skies as we got closer and the hard rain that pelted the windows changed those optimistic nods to skepticism.  By the time we arrived though, the rain had relented but the clouds were still debating whether to release more. 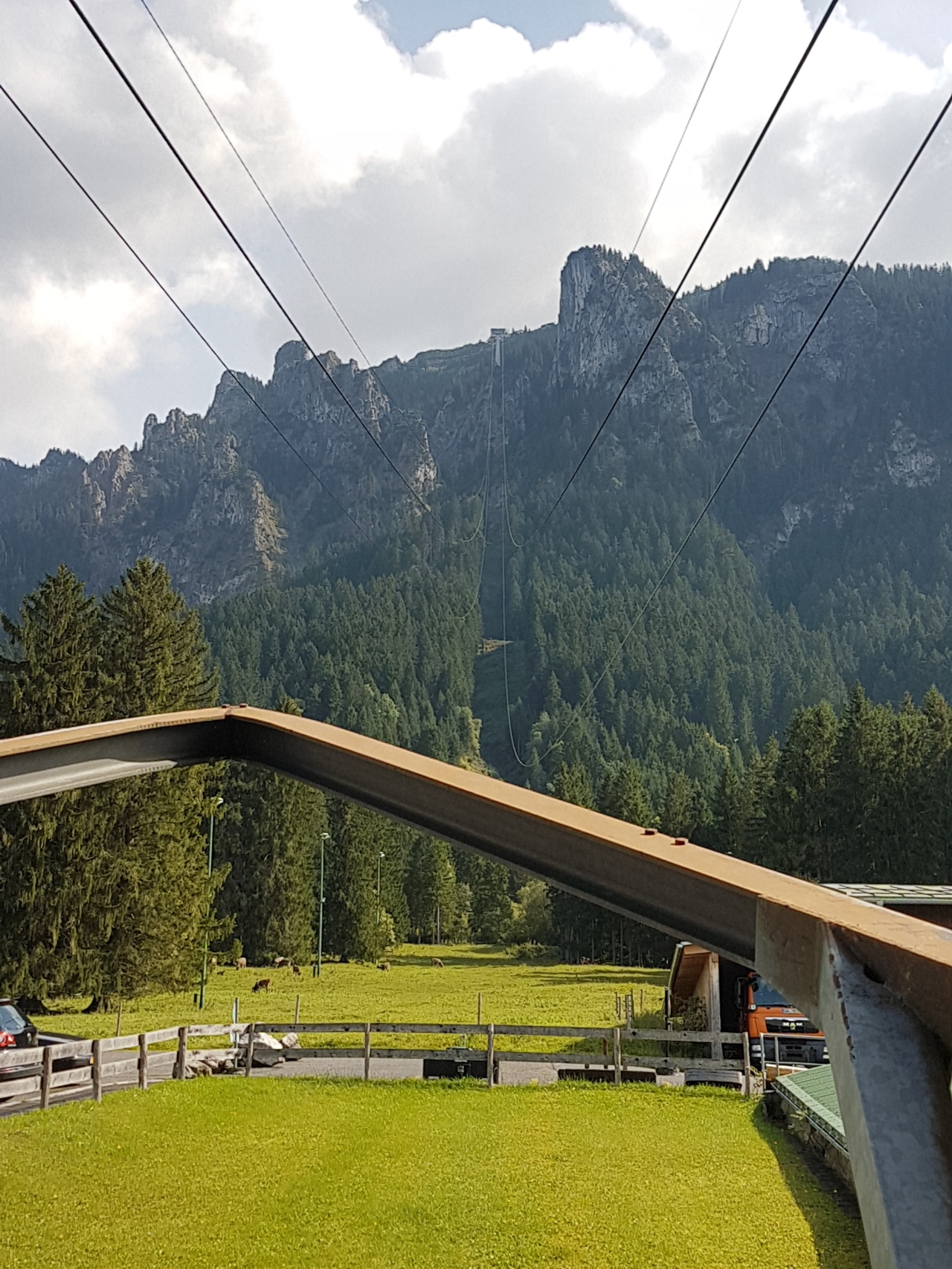 When we got to the top of the Tegelberg, it soon become clear that people’s ideas of “hiking” and what constitutes a hike can vary.  A couple of us didn’t seem to get the memo or had decided that casual shoes or fashion sneakers would be suitable.  Oddly, I was one who didn’t get the memo, and it was my memo.  For some reason I was wearing Massimo Duttis.  We also already had at least two comments from strangers who told us that we wouldn’t make it in our shoes if we took the trail that I wanted to take.  The trail was too harsh and too wet.

We soon fell into two political parties and the small conservative group decided to run away like scared little children and take the cable car back down.  While the rest of us decided to tempt fate.  We came all this way, didn’t we?  Wrong shoes or not, we were fit, healthy men.  *gorilla sounds*  This was doable.  So I was going to get my Massimo Duttis a bit muddy.  But before that, a lunch at the Tegelberg restaurant.

After lunch we started the hike.  Here is the Komoot data for the hike.

In terms of difficulty, it is all downhill in this direction.  The mud could be circumvented in most cases but indeed there were large sections of sloppy mud puddles and slippery stones, especially in the first half of the hike.  In one case, some logs were available to cross if you chose to risk injury over cleanliness.  This led to the one near death experience on the hike.  But otherwise, it was a relatively easy hike in any shoes.

About halfway down the hike, the scenery opened up and at the same time the skies also decided to clear up.  We were blessed with sunny but hazy vistas of the Schwangau area. 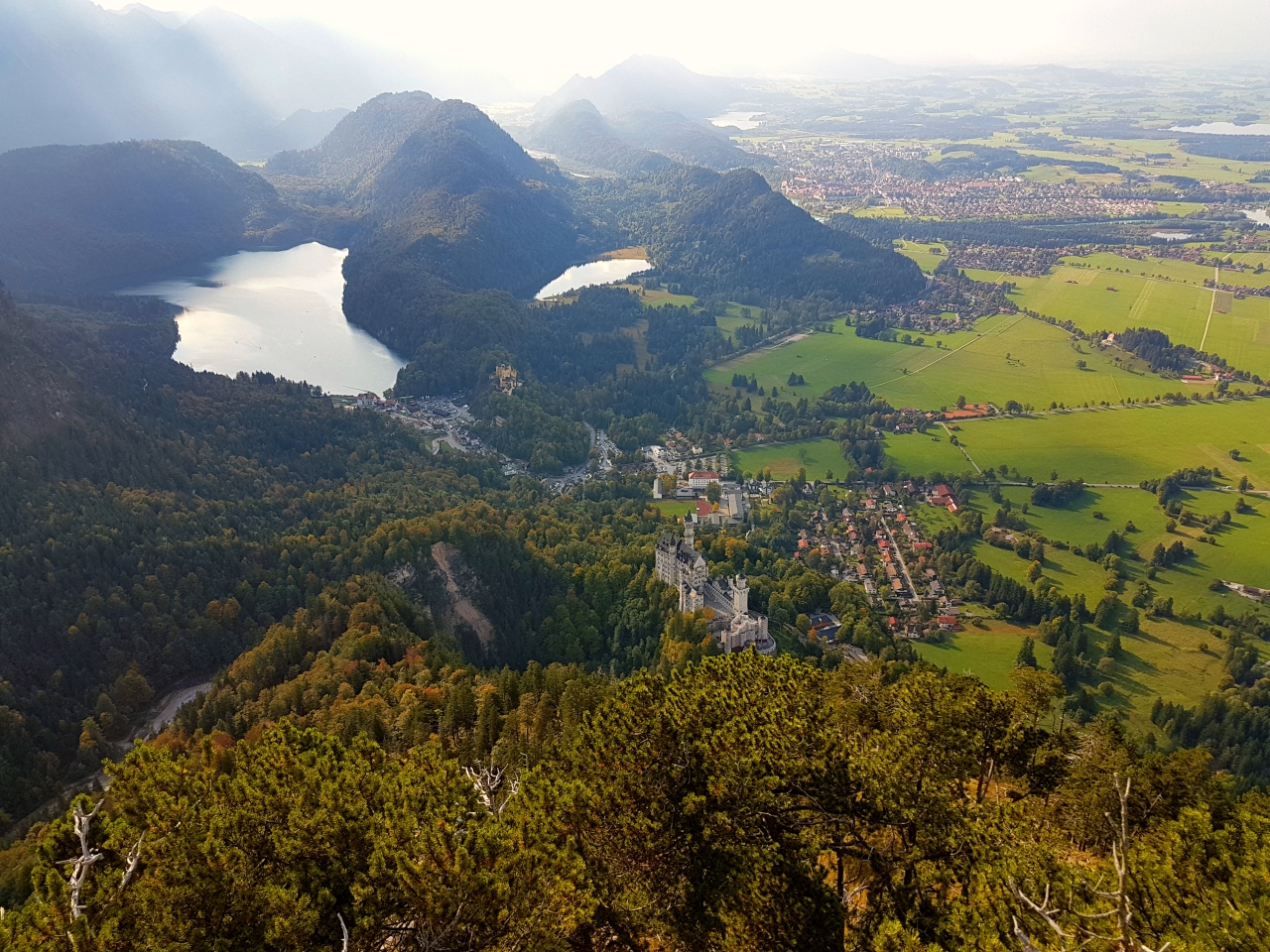 While taking an appreciation break on a rocky outcrop, we used the opportunity to ruthlessly tease our fellow colleagues who had passed up this opportunity.  For me, this was the moment I was waiting for.  Not the teasing part.  But the part about being out in the mountains with my friends and having one of those this-is-what-it’s-all-about moments.  If there was any doubt about whether we should have made the trip or just slept in and gone back to Oktoberfest, this was the moment those doubts were all swept away like a sand castle at high tide. 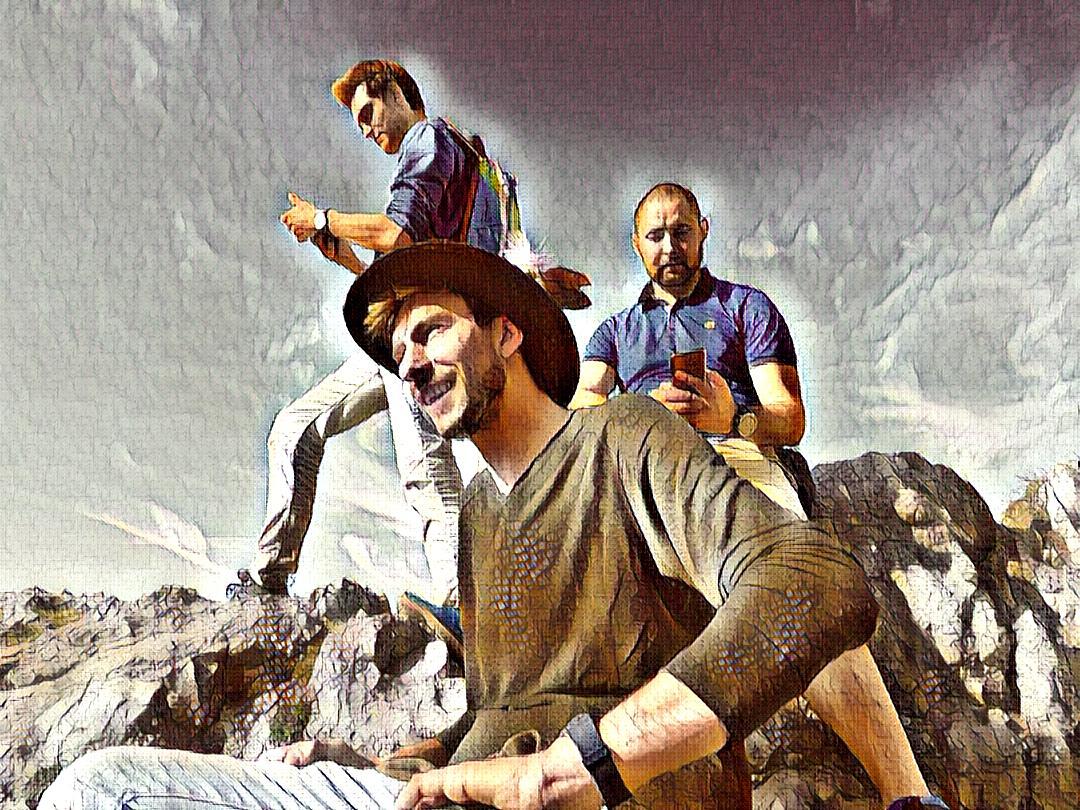 In the end, the Neuschwanstein castle was not a museum or a place to buy a ticket.  It was the backdrop of comraderie and friendship.  Just like it was a beacon for me as a child to fulfil my travel dreams, Neuschwanstein lured us not to trade away our tourist money for cheap thrills but to give us treasured memories.  We toasted friendship in the biergartens of Munich, we danced and sang like fools in the Oktoberfest tent, and then found ourselves at the top of Bavaria looking out over so much beauty.  It was a weekend I will never forget and in the museum of my travel memories, it will always be labelled “The Masterpiece Weekend“. 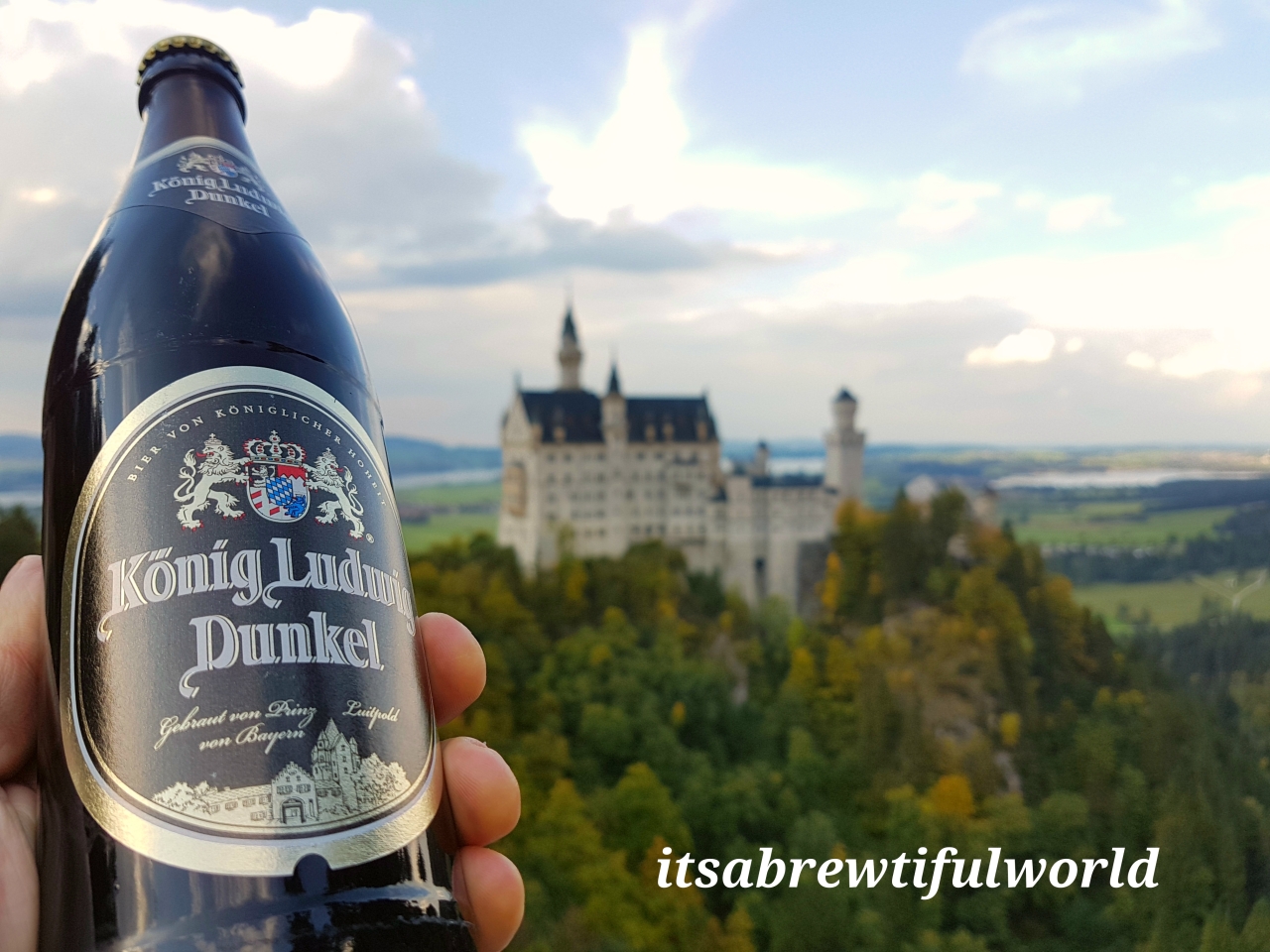