The beginning of this story doesn’t start the morning after my friends and I found brewtiful bliss in the Pschorr-Braurosl Oktoberfest tent but as a child growing up in central Pennsylvania.  To understand why Pt.3 of our Masterpiece Weekend would mean so much to me, one must know a bit of my background.  I initially intended this Prologue to lead into the actual Pt.3 details, but this post took on a life of its own and therefore shall stand alone while Pt.3 will be posted at a later time.

Like any passion that a person has, it doesn’t spring up out of a vacuum.  I am known in my circles for loving beer and traveling.  I have already shared the beginnings of my beer passion.  But what is it that gave birth to my wanderlust?  Why am I this way?  No one thing inspired my connection with the great big world more than seeing a poster of a remarkable castle perched gloriously on a hill surrounded by a magical snowy landscape.  I would later learn its name was Neuschwanstein.  Still to this day when I pronounce the word, I evoke the movie Young Frankenstein when I get to the last syllable.  I always pause.  Is it like “steen” or “stine”? 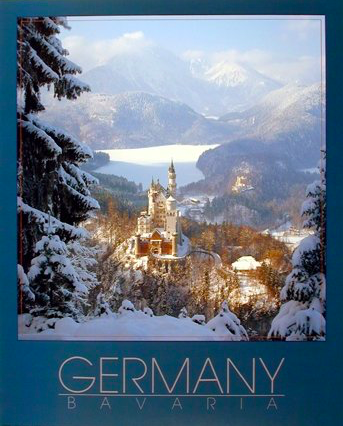 It was that poster that filled my soul with the concept of a larger world filled with beautiful and mysterious places.  When I was in high school I studied the German language for three years and it was during a slideshow of my teacher’s travels in Germany that I first heard the name “Mad King Ludwig”.  I was mesmerized by his pictures.  Still to this day, there are three that are burned into my mind.  One was a view of Heidelberg Castle with the Old Bridge in the foreground, one was the maypole on the Viktaulienmarkt in Munich, and the other was Neuschwanstein.  Of course at this time, these places were just dreams.  I had no concept of whether I would ever get there.  There was no internet, no Kayak, Orbitz, or Expedia.  I was a kid getting ready to go to university.  That was adventure enough.  But floating around somewhere in my sub-conscience was this fairytale-land impression of Germany.

Whatever passion for travel was planted inside of me lay dormant through my university years.  At some point after I graduated and was busy sitting around the house idling away my time watching TV, I came across an image of a train rolling through some beautiful countryside with a guy sticking his head out the window.  My finger left the remote long enough for me to find out the show was about traveling in Switzerland.  One of the highlights was Berggasthaus Aescher-Wildkirchli, a remote mountain hut built snug into the side of a mountain.  That hesitation in my remote trigger finger was fateful.  The show I was watching was on public television and being broadcast as part of the channel’s fundraising efforts.

It was around 1996, and to whom I was being introduced was Rick Steves and his show Europe Through the Backdoor.  After the Switzerland episode, a show about Munich and Bavaria came on.  There for the first time in my life, there was the Neuschwanstein Castle in moving images.  At that moment, Neuschwanstein changed from being a poster to a living, breathing force.  With the internet in its infancy, it became a sometimes frustrating endeavor to find out ahead of time when Rick Steves’ shows would be broadcast.  I caught one here or there.  But around 2003, I ordered a boxset of his late 90’s shows on DVD and a couple of guidebooks.  From that point onwards, the word passion in my vocabulary became synonymous with travel.

Prior to the Masterpiece Weekend, I had been to Neuschwanstein four times.  I toured the interior twice along with the neighboring Hohenschwangau Castle.  One of those visits was with my daughter.  I found that what I liked most about these visits was not going into the castles, but exploring the scenery around them.  On a lovely day, I guarantee that you will wonder why you are waiting in a long line of tourists to see 16 rooms in an unfinished castle which isn’t even that old.  The enjoyment of the castle for me comes from seeing the castle in its environment from the outside and finding new and better ways to see it.

In fact, these visits to Neuschwanstein are responsible for the first time experience in two facets of traveling that have become part of the core inspirations for my travels and for this blog.

My Favorite Memories of Neuschwanstein

Neuschwanstein will always hold a special place in my heart.  Seeing the Neuschwanstein poster as a child set my life on a journey that I never could have anticipated.  If only my spirit could somehow go back in time and hover over myself as a little kid and see the expression that I had on my face, knowing how much life that kid had to go thru before the day would come when he would stand before that castle as an adult.  All the good times and bad times that were still to come.  There are many things I would like to tell that kid to do differently but I’d be afraid to change the fate of the travel experiences he would be lucky enough to one day achieve.  As me and my friends were sleeping off the several liters of Oktoberfest beer, I was already fortunate enough to have visited Neuschwanstein four times.  But the fifth time lay ahead.  One that would put the finishing touches on a Masterpiece Weekend.  How would I have explained to that little kid looking at the poster how blessed he was to become to visit that castle with a daughter and then a few years later with some amazing friends.

2 thoughts on “Prologue to the Masterpiece Weekend: Oktoberfest 2017 pt.3”