December 2006.  As I stood outside the Cologne train station, I am sure that I had the same reaction of awe that every other first-time visitor has when exiting the station.  In most major European cities, arriving at the main train station is just the beginning of a sometimes frustrating journey of public transportation or long distance walking to reach the city center.  In this respect, Cologne has to be the most convenient city on Earth.  As soon as you leave the train station, already looming high above you is Germany’s number one visited site (according to Wikipedia), the Cologne Dom.  The historic Altstadt (old city) and shopping streets are just beyond the Dom.  So most everything you want to see in Cologne can be reached practically the moment you get off the train.

Back in 2006, I was still a resident of the United States.  I was in Belgium for a training course related to my work and had a free day to spend so I hopped on the convenient train from Brussels.  I had never been to a German Christmas Market and Cologne was the obvious choice as it is one the closest major touristic German cities to Belgium.

Wikipedia also mentions a couple other interesting facts regarding the Dom.  It has the largest facade of any cathedral in the world and it was once the tallest building on Earth for the years 1880-1884, surpassed by the Washington Monument.  But the characteristic that stands out the most about the Cologne Dom is its dark color.  Wikipedia doesn’t really discuss the origin of this feature.  While the size and architecture are impressive, it is its distinctive color (and twin spires) that always come to my mind when I think of the Dom.  After years of just assuming this was by design, I was fascinated by the color’s real origin.  The answer, found with a quick Google search like anything else, is actually linked to the phenomenon I was experiencing by stepping out of the station into the shadow of the Dom.  The close proximity of the train station meant that during the age of steam engines, the Dom was exposed to soot-filled coal smoke day after day.  The houses and shops around the Dom would also have been regularly burning coal for heat.  Therefore, the color of the Dom is pure coal smoke pollution.  Yet once you visit the Dom, you cannot imagine how it could be more impressive in its original color.

I didn’t know these facts as my eyes scanned the Dom’s gothic magnificence.  The façade is indeed enormous and very difficult to capture in one shot.

The interior is also impressive and houses the bones of the ultimate pilgrims in Christianity, the Magi.  I didn’t know at the time but this visit to Köln would foreshadow my own future pilgrimages in this brewtifulworld.  Nothing that will ever result in my bones being on display in a golden reliquary for millions of tourists to see, but in the stories that fill this blog for a few dozen.  I can be happy with that.

The main reason though for visiting Cologne back in December 2006 was to experience the Christmas Market.  As I was growing up, Christmas would conjure up images of Nutcrackers, medieval half-timbered shops and houses, and a large Christmas tree on a cobblestoned marketplace where men and women sold handmade gifts from small Alpine-like huts.  With all do respect to Dickens’ Victorian England, I always had the impression that the ‘authentic’ Christmas festive tradition and atmosphere was distinctly German. 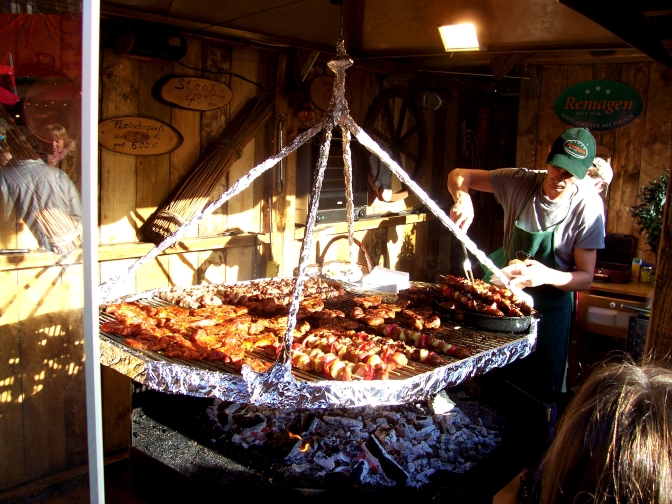 On that day though, it wasn’t the candied nuts, the wooden Christmas ornaments, or the colorful scarves and slippers.  It wasn’t the lights, the giant Christmas trees, or the German Christmas spirit that left a lasting influence on me.  It was ordering a simple glass of Gaffel Kölsch at one of the kiosks.

A kölsch is a lager beer which is brewed in Cologne.  Only breweries in Cologne who are part of the Kölsch Konvention which defines the production methods can name their beers “Kölsch”.  Kölsch is served in a distinctive 20cl glass called a Stange.  The one I received from the Christmas kiosk was a special edition glass.  At the time, I had not yet developed the idea to photograph every new beer that I tried but the above shows the glass has survived.  Normally you give a deposit and either keep the glass or return the glass for the deposit.  The choice to keep the glass as a souvenir would become a decision I was quite thankful for five years later when I bought my first two Belgian beer glasses and started a glass collecting hobby that well… has its good and bad aspects.

All around the city are the Kölsch breweries and bars, called Kölschkneipen.  Even for a casual beer lover, it is part of the Cologne experience to move from one to the other trying the different kölsches.  One of the liveliest places is Papa Joe’s Biersalon, a Gaffel establishment.

That day in December 2006 was an amazing day.  At the time, I felt like this was my one-time Christmas Market experience.  I tried to savor it as much as possible.  Little did I know as I slept on the train ride back to Antwerpen how much my life would change five years later.  I could never have foreseen that one day I’d be lucky enough to visit the same Cologne Christmas Market with my daughter and also to visit so many other great Christmas Markets in Germany, Austria, and beyond.

December 2017.  The German Christmas Market is just one of the many travel dreams I have been fortunate enough to experience since that day 11 years ago.  I went again to the Cologne Christmas Market just a week ago with a best friend I have made since my time living in Belgium.  Looking back, I know that I accomplished many of my travel dreams while cutting myself off from the world and putting up a protective wall over my feelings.  But in reality realizing a dream only means something when there is love in your heart.  Love for family (both the genetic and the emotional kind).  Love for friends.  Love for showing compassion, generosity and hospitality.  These things don’t come as easy for me as planning my next trip.  Yet they are what make up the soul of every adventure.  Merry Christmas to all who took the time to read this post and best wishes for 2018!