After enjoying German Christmas markets in a baroque way in Dresden and Leipzig, it was time for a switch to more medieval surroundings.  If you are looking for German Christmas Markets with a medieval backdrop, it would be tough to beat the back-to-back combination of Nuremberg and Rothenburg-ob-der-Tauber.  Both are walled cities with plenty of glorious half-timber houses and colorful, cobblestone streets.  In both cases, the cities themselves became as much of an attraction if not more than the Christmas Markets.

I loved both of these cities so much that I returned to them in 2016 with my daughter on our own European Christmas Market tour by car which included Czech Republic and Austria.  I will combine these experiences.  However, while reminiscing about Nuremberg, I felt it deserved a post all to itself so I will save Rotherburg for the next post.

Coming out of Nuremberg train station, you are immediately confronted with the sense that you are someplace special.  There is the buzzing of tourists that you don’t really get in Dresden or Leipzig and the medieval wall and its towers are enough to send the eager imagination into overdrive about what lay beyond.  I had no preconceptions of Nuremberg, nor had I done any research.  It was one of those times where the walk to the hotel felt unbearable as I felt every minute that slipped away was leaving me short of time to see everything.

As I had done in Leipzig, I used the daylight hours to explore what I could of the city.  During my visit with my daughter, we went outside the old city to visit the Nazi Party Rally Grounds.  Nuremberg is rich with history and sites and a feast for the eyes just walking around.  It is very difficult to soak it up in one afternoon. 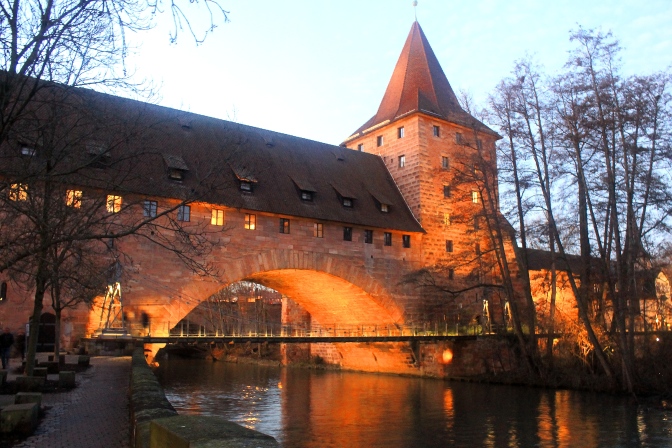 Perched up on a hill is one of the most impressive inner-city castles you will find in Europe.  What you see though has more to do with cosmetic improvements deriving from the romanticism of medieval buildings that occurred in the 1800’s.  This is a reason why I prefer castle ruins over restored and dressed up castles.  The actual castle itself had almost no importance for 300 years until tourism and the restorations after WWII. But in its heydey during the 14th and 15th centuries, it was a stronghold of the Holy Roman Emperor.  Two of the most famous of these are Maximilian I and Charles IV.  Maximilian I is of particular interest to me because of his strong link to Belgium, particularly the cities of Mechelen and Gent.  I will save that narrative for another post.  But Maximilian I was the last emperor to conduct his first governmental assembly (called the Imperial Diet) in Nuremberg Castle in 1491.

Meanwhile, people who love Prague in the Czech Republic will know the name Charles IV.  He is responsible for making Prague the beautiful city it is today and you cannot go to Prague without crossing the Charles Bridge and seeing his statue.  When I visited Nuremberg in 2016, it was the year of his 700th birthday.  You can see the emblem on the glühwein mug in the last photo of this post.  While Prague was his main capital, Nuremberg was like a second headquarters.  He stayed at the castle 52 times where he would conduct business of the empire.

While you are at the castle, stop in to the Restaurant Burgwächter for some warm German atmosphere and a hearty lunch or dinner.

In probably the most cozy corner of the old city is the former house of Germany’s pre-eminent painter with arguably the art world’s most famous hair, Albrecht Dürer.  He lived in this building from 1509 until his death in 1528.  The museum houses some replicas of Dürer’s famous work and otherwise contains a mixture of exhibits of his workshop and also period furnishings.  The audioguide is quite helpful.

Personally, I can’t help thinking that he looks like the lead singer of Dark Tranquillity, but for most readers that will be quite an obscure reference.

The square opposite the museum is a wonderful place to have a beer and admire the half-timber houses and the city walls. 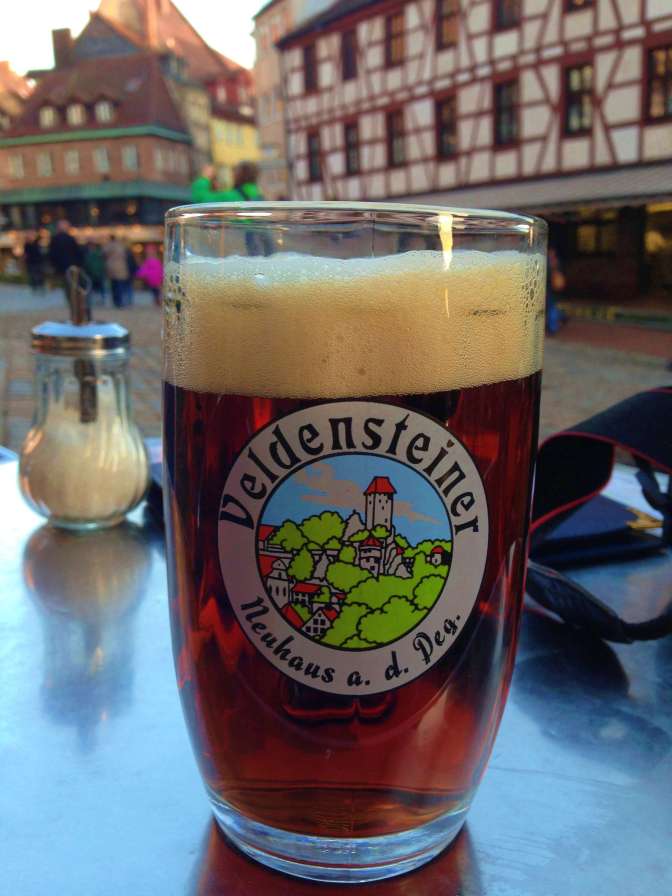 Nuremberg is an amazing city to walk around.  Between the fortifications, meandering lanes, bridges and medieval style buildings, it is a city that will tempt you to spend your time trying to capture the spirit of the city with your camera. 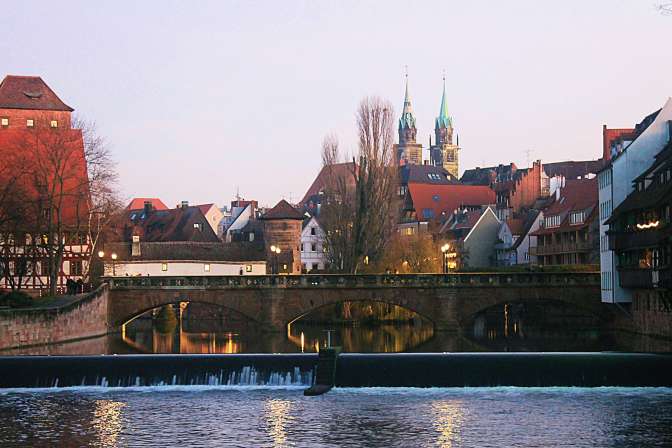 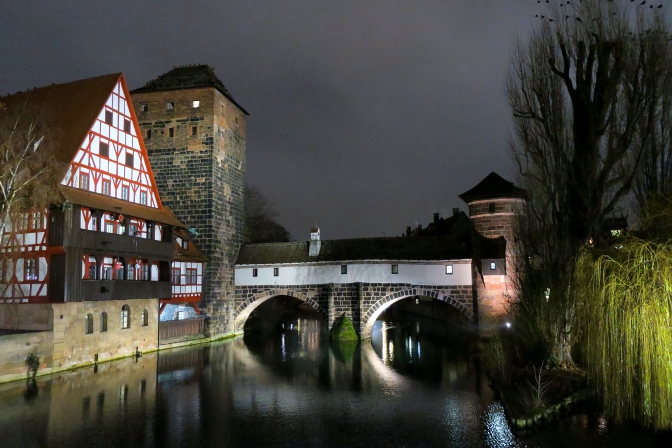 This is the only site I’ve been to outside the old city but definitely worthwhile if you are a history buff.  Both of the World Wars fascinate me and I always must seek out important sites related to them.  Living in Europe which has been shaped dramatically by those wars and whose scars can still be felt today, it is important to me to make sure I don’t take the freedoms I have here for granted.  This site was the location for six Nazi rallies before the outbreak of World War II.  It was a solemn joy to give my daughter the opportunity to connect with such history.  In a time when politics is becoming more radical on all sides in the USA, I want my daughter to have a broader view of the world in its present and past.  One of the most famous video clips after WWII ended was the blowing up of the giant swastika above the Zeppelinfeld grandstand.  Here my ant-sized daughter stands at the podium.

The Nuremberg Christmas Market is called Christkindlesmarkt or Christ Child Market.  The starting date is not as clearly known as with Dresden and Leipzig.  A little research revealed that Nuremberg and Dresden Christmas Markets attract about the same number of visitors each year (around two million), but the Nuremberg Christkindlesmarkt felt more crowded.  Perhaps it was due to the tighter medieval layout of the old city compared to Dresden. Just like Dresden and Leipzig, there is also a smaller medieval market called the Handwerkerhof tucked away in a corner of the old city near the gate just opposite the train station.  This is the place to shop for your hand-crafted gifts.  A particularly nice shop here sells intricately designed pewter steins, candlesticks, and plates.  I regret I was so mesmerized by it that I forgot to take a photo. 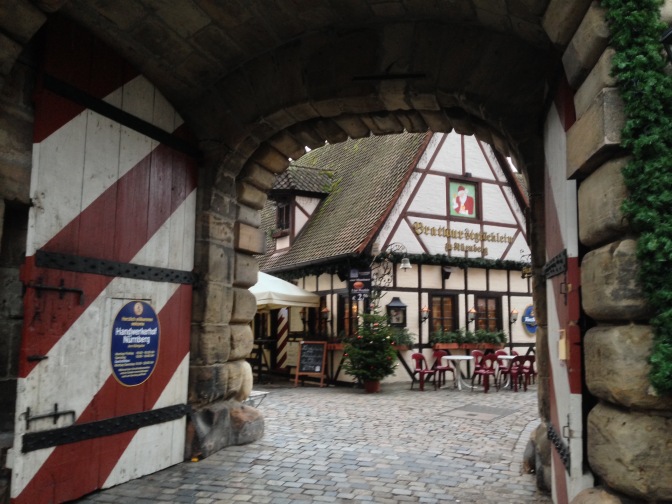 Trust me that my photography skills don’t do justice to this beautiful city and its Christkindlesmarkt.  Maybe…. just maybe I still prefer the Dresden market more.  Perhaps that is because it felt a little less claustrophobic, but the overall experience in Nuremberg was more memorable.  Part of that is due to the fact that I had less time in Dresden and didn’t get to see all the city has to offer.  For that I hope to make another trip someday.  For now, it was off to Rothenburg-ob-der-Tauber.  But before leaving, a couple requirements.  Need to try the delicious lebkuchen and glühwein.  Cheers! 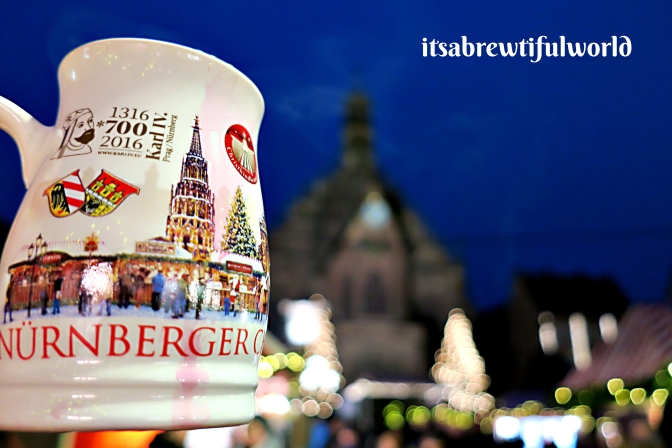