Every year when Christmas comes around, I have one tradition for myself.  Watching “A Christmas Carol”, the 1951 version starring Alastair Sim.  It is the one movie that brings back the memories of childhood the strongest.  The baking smells coming from my grandmother’s kitchen, the wide-eyed innocence of staring up at the sparkling lights as I laid under the newly decorated Christmas tree, the warmth, softness, and aroma of the winter afghans that would come out of the cedar chest in the attic, and the crackle of the Guy Lombardo Christmas record that was in regular rotation thruout December at my grandmother’s house.

I always love the scene after Scrooge has been visited by the three ghosts and he realizes that he is still alive and has been given a second chance.

There are lots of lessons in this movie but one I like to consider is that we should always appreciate life and retain the enthusiasm of children.  There should be things that continue to excite us as adults that make us dance around laughing.

So what makes me merry as a schoolboy and giddy as a drunken man when Christmas season is here?

Figuratively and quite literally.  Christmas Markets.

Not just any Christmas Markets.  The German ones.  Yes, Christmas Markets are everywhere and no matter where they are, they are a nice way to celebrate the season.  But the German Weihnachtsmarkt has a mystique that has always fascinated me.

A couple of winters ago, I finally had the opportunity to indulge in that mystique by visiting not one, not two, not three…. how does six Christmas Markets in seven days sound?  A bit indulgent?  This was the ultimate Christmas Market tour.

And all of it was possible by train.  Every morning, waking up, doing a repentant Scrooge-like jig in front of the frosty hotel room window, and hopping on the train to the next city.  Enjoying the Christmas Market in the afternoon and evening and the next day repeat.  I respect the Ghosts of Christmas 365 days of the year, but those 6 days were particularly special.

The best website for checking schedules and buying train tickets in Germany is the DB Bahn Travel Query page.

I arrived to Berlin Schönefeld airport from Brussels and went immediately to Dresden by train.

The Dresden Christmas Market is called Striezelmarkt for a certain kind of traditional cake sold there.  This is one of the granddaddies of all German Christmas Markets with a recorded history going back to 1434.  Like most German Christmas Markets, there is the main market and then a few smaller markets around the city.  Dresden has a particular nice medieval market called Mittelalter Weihnacht which is a great place for shopping for handcrafted wood and leather.  The Christmas pyramid, the 14m tall pillared structure with the fan at the top immediately gives you that Wow, I am really here impression.  Everywhere you look, there is something you either want to eat, drink, or buy.  Germany knows how to appeal to the senses.  And I stood there like a wide-eyed 10-year old in disbelief and a 43-year old in outright appreciation. 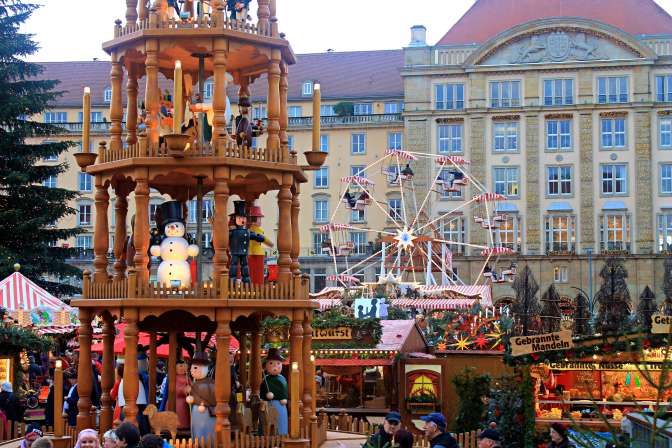 As I had arrived in the late afternoon, I had very little time to actually experience any other part of the city.  I just walked around the city admiring its Baroque grandeur.  The Dresden Frauenkirche has only been rebuilt since 1994 after its WWII-bombed remains had stood as a reminder of the war for 50 years.  A statue of Martin Luther proudly stands out front reminding everyone that the church is Lutheran.

While I didn’t do any souvenir shopping in the medieval market, it’s cozy atmosphere made it the best place to enjoy a glühwein.  Each glühwein comes served in a cool mug which you can either return to the kiosk for your deposit back or keep as a souvenir.  Naturally, I started a collection. 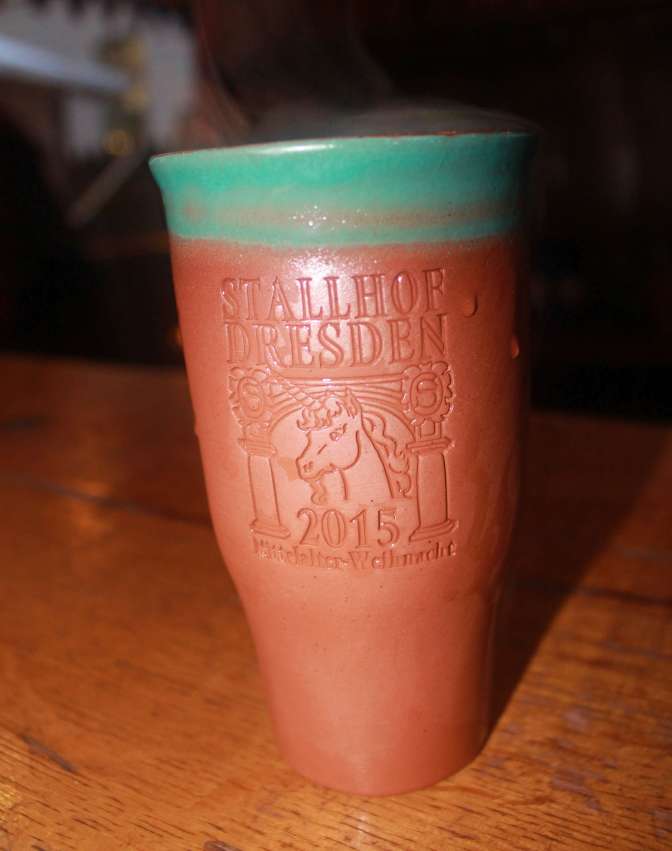 While Dresden was really all about the Christmas Market, I found extra excitement in Leipzig when I discovered that this was the city where one of the great rockstars of the 1700’s was buried.  Johann Sebastian Bach.  Or is it?  Bach’s body seems to have an intriguing story.  Apparently it lay for 150 years in an unmarked grave in Leipzig before it was moved to a church which the Allies bombed the hell out of in WWII.  I guess the Monument Men screwed up on that one.  So his body was moved to St. Thomas’s church where he worked the last 27 years of his life.  Or was it?  You can read all about the controversy HERE.  In any case, I wasn’t going to let science get in the way of a chance to worship at the grave of one of my heros.  Jesu, Joy of Man’s Desiring.

Leipzig also has a very interesting Stasi Museum which is definitely worth a visit.  Even for someone who lived thru the coming down of the Berlin Wall, it is still hard for me to believe that this communist police state existed in Germany especially when you look around at the people and consider how easy it is to travel thru Germany today.  It is tempting to imagine that it was always like this, but even 30 years ago, it was not.  The museum does a wonderful job exposing the level of spying, propaganda, and mind control that the Stasi were involved in.  The most thought-provoking artifact for me was a letter signed by an 8th-grade boy agreeing to be a snitch in his school.  This letter was signed 9 days before the opening of the Berlin Wall.

Leipzig’s Weihnachtsmarkt dates back to 1458.  Like Dresden, it has a large main area and smaller markets around the city including a very nice medieval area called Naschmarkt zu Alt-Liepzig. 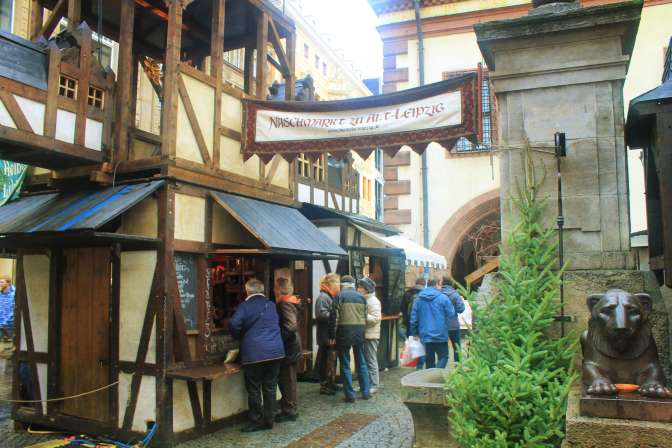 In Leipzig, it was time for a souvenir.  I have always wanted to have an authentic Nutcracker, but didn’t want to buy one unless I was in Germany.  However, it was a traditional Räuchermann (smoking man) that caught my eye.  This wooden figure is an incense burner where the smoke escapes thru a small opening in the mouth connected to a pipe.  When I saw a waiter räuchermann carrying three mugs of Warsteiner, I knew it had to be mine.  The incense come in several different scents and one small cone shaped piece lasts only about 15 minutes. 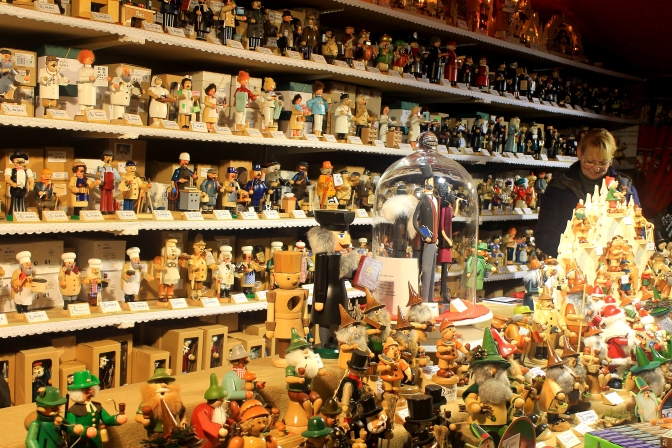 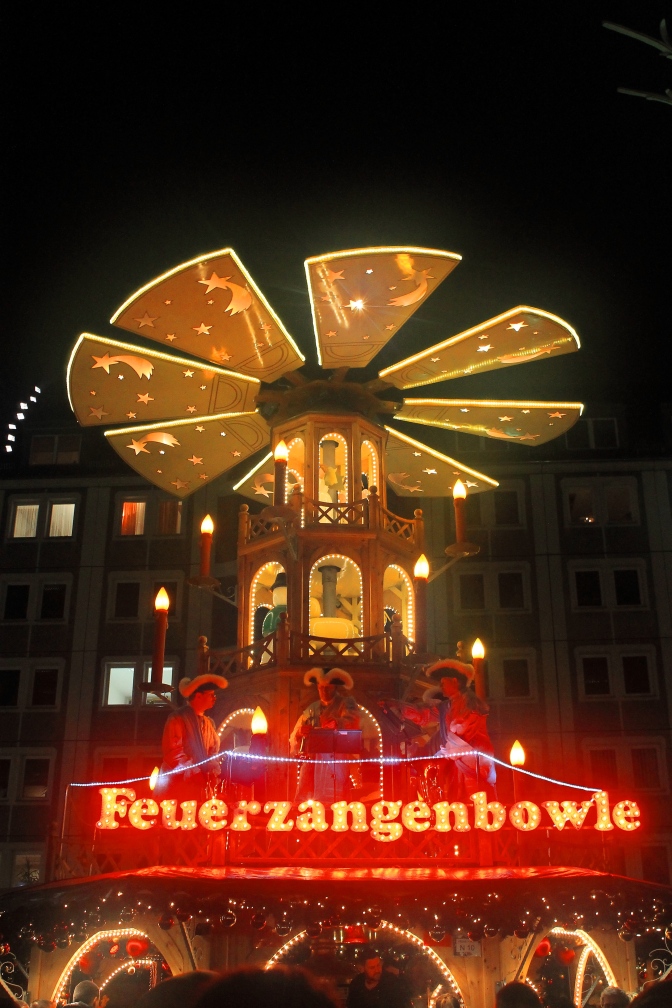 Leipzig also has a traditional Christmas pyramid (or Weihnachtspyramide) with the spinning fan at the top.  These are large versions of the traditional decoration which you can find for sale all over the market.  The decoration itself is a candle holder where the heat from the flames drives the fan at the top.  The Wiehnachtspyramide didn’t begin as a Christmas ornament but in the Middle Ages, it was a source of mood lighting in the home.

Each city gave me a completely different and amazing experience.  Two days, two of the oldest Christmas Markets in Germany, visiting the gravesite of Bach, exploring the legacy of East Germany, buying a räuchermann, starting a glühwein mug collection, and channeling my boyhood dreams of Christmas when Germany was still a far-off world of the imagination.  And there were still four more Christmas Markets to go….

Merry as a schoolboy.  Giddy as a drunken man.