Sitting down to write a blog on the subject of Bruges for the very first time would seem to be an easy task for those who know me.  For over a decade, I have been visiting Bruges anywhere from one to a half dozen times per year.  I’ve experienced it every way imaginable, from being shown around as part of a group of foreigners visiting for business to being the ‘local’ guy showing other business colleagues around, from taking the kitschy horse & buggy and tour bus rides to exploring every backstreet by bicycle, from settling into cozy hotel rooms for a weekend to daytripping by train from Antwerpen.  I’ve stayed in nice canalside hotels and I’ve stayed in hostels.  I’ve been there in every season and seen the city in snow, rain, and sunshine.  I’ve bicycled to it from Gent along the connecting canal and bicycled from it to the North Sea.  I’ve experienced it’s beer festival, chocolate festival, and Christmas market.  It is a city that I am so intimately familiar with that indeed composing my thoughts into a cohesive and concise narrative is a daunting task.  Fortunately this is itsabrewtifulworld and if you are bothering to read this, you didn’t come here looking for a second opinion on Trip Advisor’s Top 10 to-do list.  You came here to find out where to get the best beer experiences in Bruges.  And I am about to give you my favorites which I think make Bruges an elite beer pilgrimage.

First of all, what is the history of beer in Bruges?  Is it an authentic pilgrimage or one that has simply come to be because of the influence of mega-tourism?  Let’s face it, Bruges becomes more and more touristic every day.  Beer is no longer just a niche component of Bruges sought out in dusty cellar bars or down narrow hidden alleys.  It is becoming a huge part of the city’s character.  In fact every time I visit Bruges, I find it’s beer tourism becoming more and more directly in your face and a huge focus of the city’s cultural appearance.  But is it authentic?

Fortunately for us beer pilgrims, Bruges does in fact have a rich tradition in beer making.  Bruges archives have records going back as far as 1441 listing a few dozen breweries existing within the city walls.  Documents from the 1700’s specify prices for Groot bier (high quality) and Klein bier (low quality) made in Bruges.  One of the top museums in the city, The Gruuthuse, is named for Lodewijk van Gruuthuse, who made a fortune selling gruut and levying taxes on brewers.  Gruut was an ingredient used to make beer before hops became more popular.  While the gruut is no longer sold from the Gruuthuse and there exists only two commercial breweries in the historical part of Bruges, thanks to tourism, the beer culture has risen out of the shadows of the art, architectural, and historical hot spots and become an integral part of any visit to Bruges.  It is growing so fast, I wouldn’t be surprised if I have to revise this post several times in the future.

I will define a Beer Bar as an establishment which is mainly targeting beer drinkers and not a place I’m interested in having a meal.

website
This relatively new bar/shop has the envious distinction of sitting in one of the most photographed and scenic locations in the city, on the Dijver canal just where it makes a bend behind the Belfry.  It is shaded by perhaps the most famous tree in the city (a European beech).  It is nicknamed the Beer Wall because of the line of display cases leading from the Wollestraat entrance to the bar containing numerous beers and matching beer glasses.  Available at this bar are 16 types of beer on tap, but you do not come to this bar for the beer selection.  You come here to sit on the terrace, sipping your beer under the beech tree in this iconic corner of Bruges.

website
Sitting at the end of a hidden alley off Bruges’ busiest pedestrian street, Breidelstraat, is the quintessential cozy, medieval Belgian beer bar De Garre.  Blink and you’ll miss it.  Definitely a top pilgrimage in Bruges.  The 130 beers on the beer list make for a good chance you can experience a new one, but the real treat here is the Tripel van de Garre, the very strong 11% alc. house beer.  Given that level of alcohol, one has to be a bit strategic in fitting this beer into a Bruges pub crawl.

website
Brugs Beertje is found on the easy to miss and forget side street, Kemelstraat.  I’ve often found myself wandering around looking for this place when I was too stubborn to ask or without a GPS connection.  I have a habit of thinking it is located in a more well hidden place when in actuality it is a side street off the main Steenstraat which links St. Salvador to the Grote Markt.  This bar claims 300 different beers in its repertoire.

website
Le Trappiste is a new beer bar that I discovered on my most recent visit to Bruges. It is an international beer bar and specializes in having beers from around the world.  The website claims about 100 different with a rotating 10 on tap.  The most interesting part of this place is the 13th century cellar in which it is located.

website
Although called a “Cafe”, this is more of a beer bar.  The website touts it as a place to enjoy Trappist beers, but the beer pilgrim will be excited to find the selection of craft beers on tap from De Struise Brouwers who has become one of the most beloved craft breweries in the world, known for their various barrel-aged quadrupel beers.  The interior is cozy with several roses hanging from the ceiling and it is located on the hidden Cordoeanierstraat which is close to the Choco-Story museum. 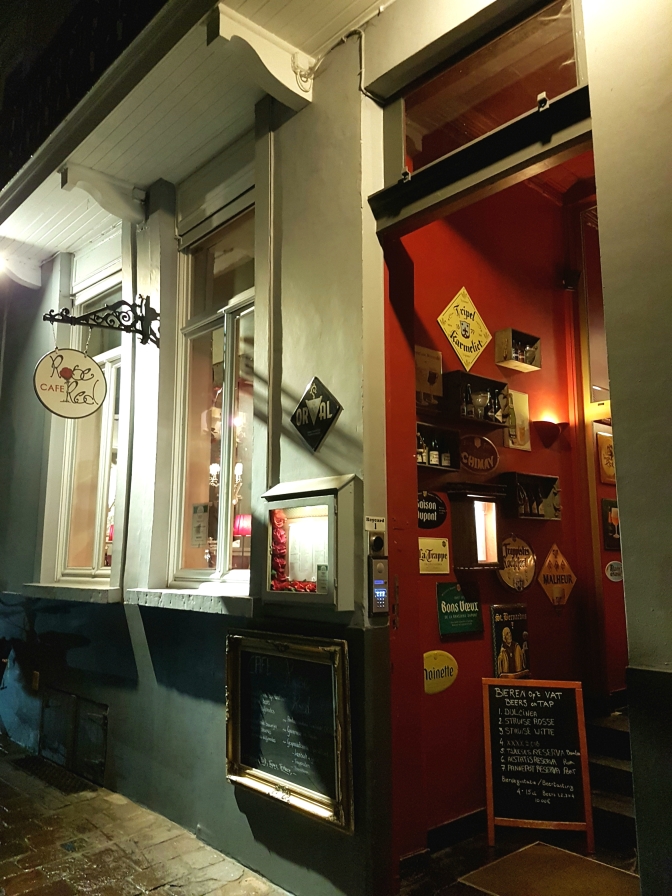 I have defined these as cafes as opposed to beer bars because they are establishments where it is common to grab a bite to eat as well as enjoy a brew.

Kasteel Minnewater is not a place to go for trying any new beers, but it is one of the most scenic spots to enjoy a beer in the entire city.  It’s location on the Minnewater which is close to the train station is a great place to soak up your arrival to Bruges or take a last scenic beer stop before leaving.

website
Cafe Vlissinghe claims to be the oldest pub in Bruges, founded in 1515. This is a great place to grab a light meal on the terrace in the summer or a hot bowl of soup inside in the winter. If you are lucky you will meet the resident dog (please don’t feed). Beer pilgrims will enjoy Cafe Vlissinghe’s own house beer.

website
Bistro Du Phare sits on the far edge of the historic center of Bruges just before the canal leading to Damme.  This is one of my favorite places to grab a beer and light meal when I am cycling around the area of Bruges and Damme.  Here you are away from the maddening tourist crowds and sitting with locals and cyclists.

website
De Halve Maan is located on the busy tourist square, Walplein.  No doubt it will be on every tourist’s itinerary visiting Bruges.  The tour is interesting and worthwhile and has a nice stop on the rooftop.  The food is overpriced so I tend to avoid it for meals, but the real reason for coming here is the star of the show, the delicious Brugse Zot Blond, which in my opinion is the best blond in Belgium (see above photo from Kasteel Minnewater).  The other beer brewed onsite is the Brugse Zot Brune which is also tasty but just a notch below the Blond.  This is one of the few cases where I prefer a Blond over Brunette.  De Halve Maan is also associated with the Straffe Hendrik beers which used to be brewed at this location but are now brewed offsite.  The origin of the brewery goes back to 1859 with a man named Leon (Henri I) Maes.  The first beers brewed here were traditional sour beers.  His son Henri II and grandson Henri III dabbled in English stouts, pale ales, and German style pilsners.

website
Bourgogne des Flandres was a beer made in a brewery which existed in Bruges from 1825 – 1958.  After the brewery closed down, the production was taken over by Timmermans outside of Bruges.  As of 2015, the brewing process has returned to Bruges in a new microbrewery tucked away on the Kartuizerinnenstraat complete with a canalside restaurant and gift shop.

website
Located in a little shopping center just between the Basilica of the Holy Blood and Restaurant Tom Pouce, this shop is run by De Struise brewers from Oostvleteren.  This is the place to go to find rare and unique bottles of beer, including some from Netherlands and Denmark.  Tasting is possible, such as the delicious Blue Monk stout, and there are usually a few beers on tap as well.

website
Fort Lapin is not located in the historic center of Bruges but just outside the city’s ring on the Koolkerksesteenweg, not so far from Bistro Du Phare.  The brewery has been around since 2011 and has a 6 (dubbel), 8 (tripel), and 10 (quadrupel).  There is also a seasonal beer called Snowlapin.  Stop in for a tasting and/or brewery tour and enjoy the family atmosphere.  You will likely meet the head brewer Kristof Vandenbussche. During my visit, I tried the Fort Lapin 6 brewed with hibiscus flowers.

I have to admit that I haven’t yet splurged on this newest addition to the list of Bruges food/drink museums (e.g. Friet Museum, Choco Story).  It is situated on Breidelstraat just a few meters from the alley entrance to the De Garre pub.

Scattered around all of the touristy shopping streets are several bottle shops selling a wide range of Belgian beers, glasses, and assorted other beer-related knickknacks.  I always make sure to take an empty backpack with me because I always find new beers to take home with me to Antwerp.  I don’t have a particular favorite but if you have the time to shop around, you may find the bottle prices can vary from shop to shop.

website
After a long dark winter in Belgium, the Brugs Bierfestival gives a brief ray of hope each February.  This beer festival has a bit of a checkered past with me, but it is the one beer festival I look forward to the most.  Originally it was set in the halls of the Belfry but the crowds made it too difficult to move from one place to the next.  It was moved to a new warehouse-like location near the new opera house over the last couple years but the venue for 2017 as of this post is still a mystery.  The selection of beers and breweries is excellent but to get the most out of the festival, my experience has shown it is best to visit before 16h00.  Later than this, expect it to be too crowded to explore the different kiosks comfortably.  I will be curious to see whether the new venue will be chosen to alleviate this problem.

One thought on “Brewtiful Bruges”