Looking at the following painting, you see the inside of a Danish tavern.  The word “Øl” which is Danish for “beer” can be seen on one of the signs.  Unless Danish men drink beer from brandy sniffers, everyone seems to be drinking some kind of liquor rather than beer.  These are some hardcore drinkers sitting around in a tavern well lit by what looks like a sunny day.  One guy in the middle is smiling but it is the gentleman in the foreground whose somber mood completely contrasts the warm feeling from the light.  Something is weighing on his mind and the bartender has thoughtfully left the entire decanter of liquor to help him forget.  I could imagine every guy in every Philadelphia bar looking the same way the day after realizing Nick Foles would be playing quarterback for the Eagles in the 2018 playoffs instead of Carson Wentz*. 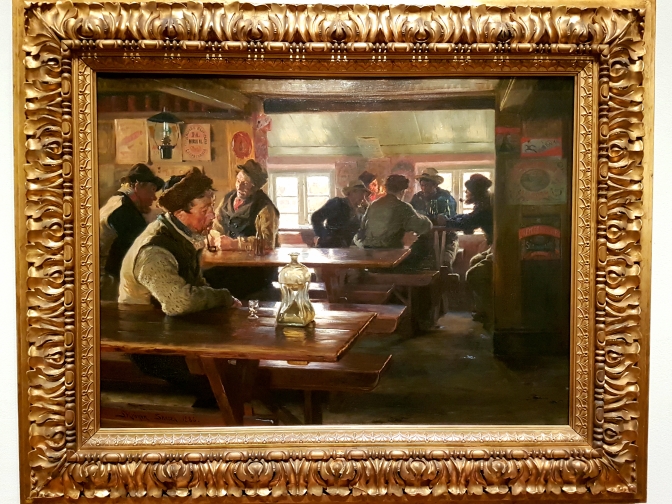 While this painting appears to be old, the interior of the tavern and the clothing of the men betray the real age.  This painting was made in 1886 by Danish artist Peter Severin Krøyer in the spirit of the 17th century Dutch masters.

The 17th century was the heyday for Dutch paintings about everyday life.  I find them fascinating the same way I find old black and white postcards from the late 19th and early 20th centuries fascinating.  It is one thing to look around Europe today and see the “old buildings” and be in awe of their historical value and charm.  It is another to see them when they were not the old buildings, but the normal buildings of the day.  That to me is one of the great values of the Dutch paintings of the 17th century.  They make the places that still exist today come even more to life.

Peter Krøyer’s tavern painting is not the only more modern painting in the Philadelphia Museum of Art to be inspired by the Dutch masters.  The famous impressionist, Édouard Manet, also felt inspired by the Dutch masters after a trip to the Netherlands in 1872.  Afterwards he painted this portrait which is not named for the man, but for the beer.  Le Bon Bock.  The style is very familiar to fans of Frans Hals.

Now like most beer fanatics, we love to take pictures of our beers and we love having pictures taken of us with our beers.  But imagine that the gentleman in this painting, in order to get a bloody picture of himself holding a beer, had to sit in front of Manet sixty times.  It must have been a really bon bock.  But it does make me wonder.  How cool would it be to have a Frans Hals-inspired portrait of myself holding a beer hanging in my man cave!

One of the most famous 17th century Dutch artists known for paintings of people drinking was Jan Steen.  Steen was a contemporary of Rembrandt and in fact both were born in the town of Leiden.  Unlike Adriaen Brouwer who was not a brewer but liked to paint pictures of people drinking beer, Jan Steen came from two generations of brewers and was himself both a brewer and a tavern owner for a time.  His painting Rhetoricians at a Window really exhibits what set Dutch art at the time apart from other countries.  The facial expressions and the sense of amusement were such a radical contrast to the seriousness of the portraiture and religious scenes that dominated the art world.

Presumably the setting is a meeting house of the rhetoricians who were a club of actors, poets, and artists.  Here you see one member reading the poetry written by the guy looking over his shoulder.  The man reading is really putting his heart into it in order to impress the critic sitting at the other side of the window, while you can almost imagine the pensive author mouthing the words along with the man speaking.  The critic is clearly not impressed and the facial expression is priceless.  There is not enough alcohol in his fancy stein to make the moment entertaining to him.  Meanwhile one guy in the background could care less and is chugging down his beer.  The expressions in the painting are great, but my favorite part of the painting is the brickwork.  Bricks are very common, standard building materials in many parts of the world, but somehow in Belgium and the Netherlands, the brickwork has an extra special character.  And it is the very realistic brickwork in this painting that gives me a cozy, step-back-in-time feeling.

Jan Steen appears one more time in his painting of the ultimate drinking moment in the history of the planet.  Moses Striking the Rock to bring forth water (also known as Heineken Beer**) while leading the Israelites thru the desert is not necessarily a painting meant to amuse and was a rare change of direction for Steen.  This moment sealed Moses’ fate as he was not allowed into the Promised Land after this.  Perhaps if you stretch your imagination, this painting symbolizes a beer lover who is so desperate for a beer that he or she will bring forth a Heineken at the expense of their soul entering the promised land of Untappd.

While Steen’s Moses painting has obvious religious and moral overtones, the final highlight on this tour has more subtle overtones.  Judith Leyster’s The Last Drop depicts two guys who are clearly enjoying themselves.  One has already reached his last drop and is holding his empty stein open towards the floor while the other one is guzzling down his last drop.  Meanwhile a creepy skeleton seems waiting for the guy to drink himself to death.  This scene is a warning about the binging that occurs right before Lent season.  Today we just stick boring warning labels on the beer or on billboards.  Whether serious or amusing, this painting was my favorite of the collection.

Judith Leyster is a great example of how difficult it would have been to be a woman in a man’s profession in the 17th century.  All of her works were either attributed to Frans Hals or her husband for 233 years after her death.  It wasn’t until 1893 that art experts finally started to correct history.  Today her works are on display in the most famous art museums in the world, including the Louvre, Rijksmuseum, the National Gallery in London, and the National Gallery of Art in Washington DC.  In honor of another woman who for over two centuries got the short end of the stick in history, I will drink a toast and peek out of the corner of my eye to see if a skeleton is holding an hourglass with the sands of my life running out.  Cheers.

Oh and by the way, Leyster was the daughter of a brewer.

* My apologies for the reference which will be out-dated within the next few weeks and completely unknown to non-followers of American football.
** In Belgium, Heineken beer (from the Netherlands) is commonly referred to as water.