To Americans and World War II history buffs, that very name conjures up images of under-supplied American soldiers fighting off Germans during the devastating winter months of December 1944 – January 1945.  History calls it the Battle of the Bulge.  During this battle, Americans suffered their most casualties of any battle in the war, somewhere around 89,000.  (Just to put things in perspective, Russia suffered 1,1 million casualties in the Battle of Stalingrad which lasted over five months.)

Today the Ardennes is a destination for cyclists, campers, and weekend holiday house renters.  The Ardennes is the forested, hilly region in the southern half of Belgium which forms a natural barrier with the northern half.  Over a thousand years ago this barrier had a direct influence on why the north of Belgium is speaking a Germanic language like Dutch and the south a Latin language like French.  The French speaking people descend from a mixture of the Celts and Romans who remained here after the fall of the Roman Empire.  More and more Germanic people migrated into this region, especially after the fall of Charlemagne’s empire in the 9th century.  They would have migrated from the north and more or less the migration stopped at the dense Ardennes forest.  Amazingly, that boundary still exists today and separates Wallonia (French-speaking) and Flanders (Dutch-speaking).

Belgium is a country of cycling fanatics

When you live in Belgium, you can probably be forgiven for not knowing a single famous Belgian except for maybe one…Eddy Merckx.   The winner of five Tour de France races, his name is spoken with the same reverence that Americans give to Michael Jordan or Joe Montana.  Every man, woman, and child owns a bike and in the cities of Belgium, you are just as likely to get stuck in a Monday morning bicycle traffic jam behind a sea of schoolkids and parents as in a queue of automobiles.  Belgium is replete with great bicycle rides, many of which I feature in my blog.  It is a country where the villages are close together and the space between each village is not cluttered up with stripmalls and fast food chains.  It is easy to get into the countryside for scenic bike rides in Belgium.  And of course for Belgium, as with all of Europe, history is around every corner and down every small road.  For Belgian cyclists, the Ardennes is the region that separates the Belgian boys and girls from the men and women.  It offers the biggest challenge to cyclists in Belgium, but it rewards with the most beautiful scenery.  So on a holiday weekend in May 2016, I set out to discover whether I had the legs to consider myself a serious part of Belgium’s cycling community.

Rather than spend the holiday weekend in one of Europe’s great cities, I decided to grab my tent and bike and hitch a train ride to Barvaux where I set up basecamp at Camping aux Frênes.  Besides being a great home-base for a regional bike ride, it is situated just a few kilometers from the beautiful village of Durbuy.  There is a scenic bike path which follows the meandering L’Ourthe river between Barvaux and Durbuy making it easy to do some exploring there.  In addition, I made a note to visit nearby Wéris where Belgium has its own Stonehenge-like megaliths dating back to 3000BC.  But the main goal of the weekend was the 57km ride to the town of La Roche-en-Ardenne.

Here is a reproduction of the bike ride using Google maps.  I have noted with a skull and crossbones where the most difficult climb is.  Note that the Wéris megaliths are not directly on this route, so a diversion or side-trip is necessary to see them.

This ride was everything I expected in the Ardennes, a constant series of climbs and valleys as you can see in the inset elevation profile in the above map.  The benefit of starting from Barvaux is that La Roche is higher in elevation, so the way back is more descending.  The scenery on the route is a refreshing break from the flat farmlands of Flanders.  Along the way to and from La Roche, you will pass the small crossroads village of Beffe, where an American tank gives a reminder of this area’s bloody past. 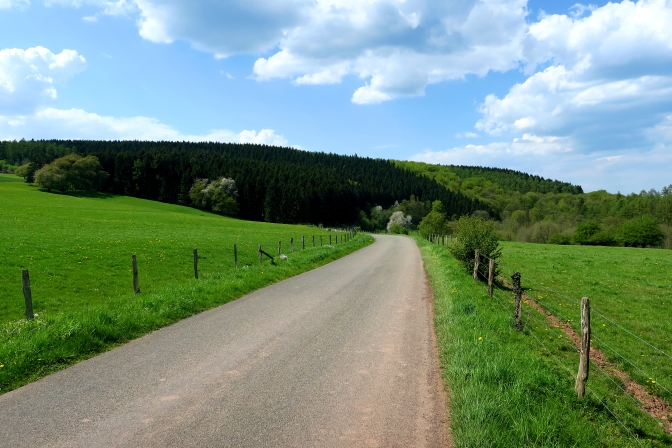 I was quite surprised at the picturesqueness of La Roche-en-Ardenne.  It has a small ruined fortress which was furiously bombed by the allies in WWII during the Battle of the Bulge.  The town reminds me a little of Bouillon.  Not wanting to get too comfortable knowing I had a grueling ride back to Barvaux, I went straight to the museum.

The interior of the museum is full of artifacts and staged scenes made up of wax figures, all the things you expect in an old war museum, including the dank oily metallic smell of old vehicles and military equipment.  One of the things I feel most privileged about being able to travel is finding small places like this where almost no international tourists would be found.

Besides this museum, there are monuments to be found all over the twisty roads between Barvaux and La Roche dedicated to American soldiers who died in the winter of 1944 including the one below marking the first American killed in the battle on December 21, 1944, John Shields. 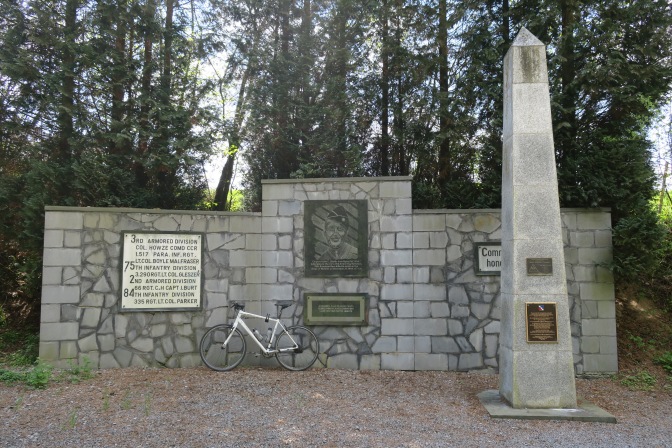 One who reads my blog will wonder when a beer pilgrimage or beer photo is going to appear.  While in La Roche, I did not indulge in the local beer culture or even note whether one even exists.  The fact is, on such a bike ride, beer is the enemy, and I chose this time to wait until the end.  I still had the monstrous climb near Beffe and all the other climbs before and after.

I did complete the ride which I was quite proud of even though it was barely 60km when all said and done.  I gained a greater respect for the cycling culture in Belgium and without a doubt this ride is one of the reasons bicycling is my favorite way to enjoy experiencing Belgium.   Of course as soon as I arrived back in Barvaux, I stopped at a cafe and enjoyed a delicious Durboyse Tripel, the “Bière du Durbuy” brewed at Brasserie Lefebvre.  The Durboyse beer has been around since 1986, with the Tripel not introduced until 1996.  Later that afternoon, I would take the scenic route to Durbuy.

Durbuy is a little fairytale village with a few cobblestoned streets lined with quaint shops and cafes.  It is a great place just to stroll and step back in time.  For the sake of tourism, it is the self proclaimed “Smallest Town in the World.”  That of course is just a gimmick but it has its charm.  You can see all of the streets in one hour, but it is places like this where it is best experienced by taking it slow and soaking in the atmosphere.

At the end of town is the dramatic Chateau de Durbuy, which is still an actual residence for the local Count d’Ursel.  Visits can be arranged by reservation.

Along the Rue de Récollets behind St. Nicolas church is a little alley which exemplifies the character of this town.  Just beyond this street is the distinctive open rock formation which marks the northeast boundary of the town. 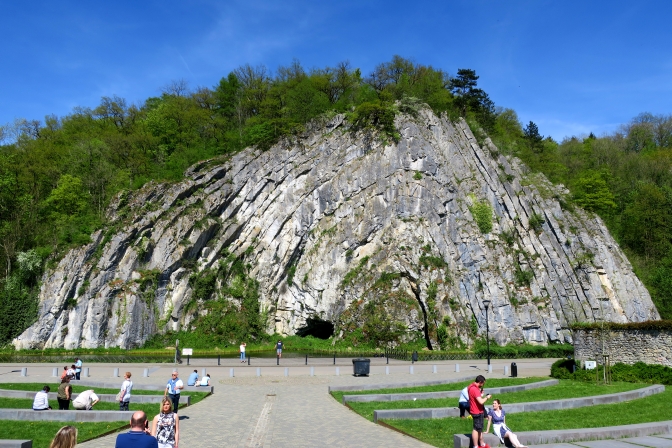 Durbuy has a beer-brewing past, which is the inspiration for the Durboyse line of beers.  However, this is brewed 100km away.  For a locally brewed beer, there is La Ferme au Chêne, where the Marckloff amber beer is brewed. 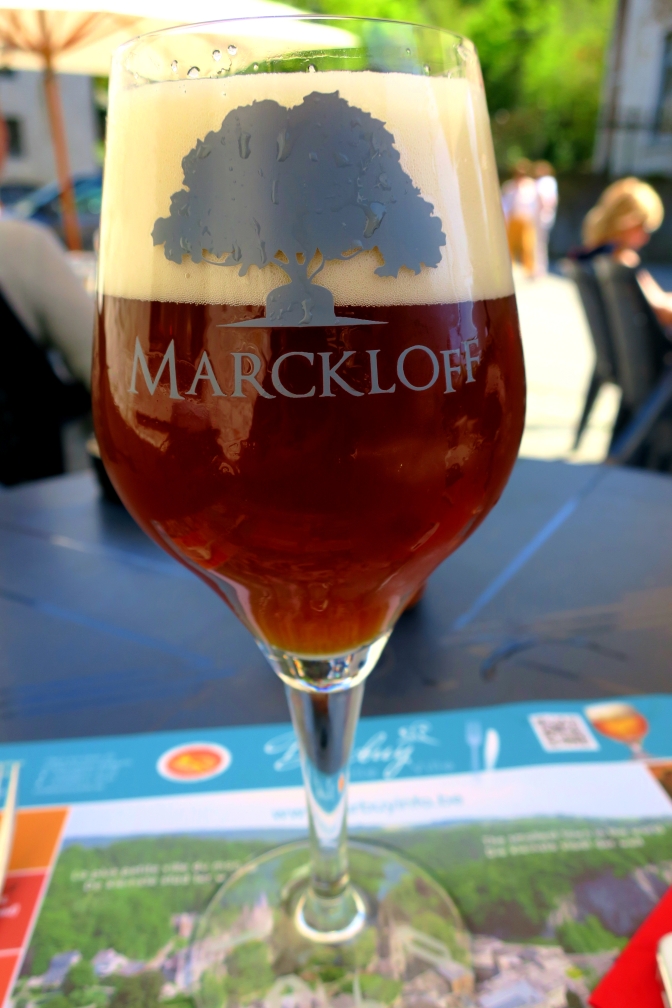 A good bar to throw back a few pints is Bar Tortuga, a Pirate-themed bar on Rue de Récollectines (not shown).  Strolling the main street, it is easy to find the Durboyse and Marckloff beer and beer glasses (yes, I own the Durboyse glass) for sale in the shop windows.

For a real step back in time, as opposed to the touristy one in Durbuy, a visit to the Wéris megaliths is a must.  These standing stones and tombs predate the country of Belgium by some 4800 years.  They aren’t as grand as Avebury or Stonehenge in England, but they are still incredible historic remains of ancient engineering.

One thought on “Beer & Bike: Durbuy and La Roche-en-Ardenne”