Dingle is a small isolated (but touristy) fishing village in a remote corner of Kerry County, Ireland.  For any Americans reading this who are not from West Virginia, when you think about West Virginia, this is exactly how the Irish think of Kerry County.  For others, you might get a better impression if I use the term hillbilly backwater.

However, if you want to experience small town Ireland in an idyllic location where at times you feel on the edge of the known world, you can’t really beat Dingle.  I have visited in July and November and enjoyed it both times.  If you really want the feeling of isolation and are lucky with the weather, early November can be your ticket.  I hiked Dunmore Head and Waymont and had the entire scenery to myself.  The village of Dingle is packed with tourists in the summer which makes for a livelier nightlife, and there are several good pubs for listening to traditional live music.  A proper visit to Dingle should be at least 2 nights and 1 full day.

Dingle from the other side of the bay

For such a small remote place like Dingle, it has enough great pilgrimages that one could focus on just those and make a complete visit to Dingle.  The city itself has several nice pubs with live music and the area has two small breweries and a distillery.

Similar to Scotland, Ireland has both a whisky and beer culture.  While Scotland’s whisky culture is superior, Ireland, which is home to Guinness beer, trumps Scotland in the beer category.  The main reason are the Irish stouts.  Arguably my favorite type of beer, the rich dark smoky or coffee-tinged stout is the flagship style of beer for most Irish breweries.  There is also the Irish Red Ale and Pale Ale, the latter being a bit softer version of the American IPA.  But when I travel in Ireland, what I am looking for when I walk into a pub or a supermarket are the stouts.

To fully maximize your beer experience on the Dingle Peninsula, it is beneficial to know something about it’s most famous son.

I have always been fascinated by stories of survival and exploration.  My bookshelf contains the likes Endurance by Alfred Lansing, In the Heart of the Sea by Nathaniel Philbrick, Over the Edge of the World by Laurence Bergreen, and River of Doubt by Candice Millard to name a few.  Other than ocean exploration, no place on Earth has as unforgiving a landscape and is linked to as many hallowed names as Antarctica.  Explorers are like history’s rock stars and we know them by last names.  Antarctica has Shackleton, Scott, and Amundsen.  The feats of strength, guts, will, and stamina in being an Antarctic explorer in the early 20th century never ceases to astound me, especially when you consider the lack of technology that existed.  Just as rock bands cannot tour without their dedicated and hard-working roadies, men like Shackleton, Scott, and Amundsen couldn’t have achieved any of their fame without a crew of people who were asked to have as much strength, guts, will, and stamina as their leaders… without the fame.  One of those men was born in Annascaul, a small village just a few kilometers from Dingle.  His name was Tom Crean, the subject of a wonderful biography, aptly titled “An Unsung Hero” by Michael Smith.

Both Scott and Shackleton had fated trips to the Antarctic.  On Scott’s expedition, he died on his way back from the South Pole, failing to reach it first, beaten five weeks earlier by Amundsen’s expedition.  On Shackleton’s expedition, his ship Endurance became stuck in the ice and led to one of the world’s most famous rescue stories.

Being an integral part of one of those expeditions would have provided enough hardship for one lifetime, but Tom Crean is one of a few men who was part of both.  On both expeditions, he was directly responsible for saving the lives of several crew members.  On Scott’s expedition, he and another man hauled an invalid colleague 100km towards a base camp.  When they couldn’t go on due to low rations, Crean did the final 60km himself with  a bit of chocolate and a couple biscuits and no survival equipment.  Because of his efforts a rescue mission was able to return the other two men alive.  On the Shackleton expedition, Crean was one of the six men, including Shackleton, who sailed in a lifeboat from the stranded crew in the Antarctic to South Georgia island where they still had to hike 48km over uncharted glacier covered mountains to reach a shipping outpost.  Amazingly, the stranded crew was rescued 3 months later.

In all, Crean was a part of three Antarctic expeditions and exhibited many times the qualities of an unsung hero.  After retiring, he went home to Annascaul and opened a pub called the South Pole Inn, which for any pilgrim coming to Dingle is a must visit.

The South Pole Inn sits on the N86 road from Tralee and will be passed on the way in and out of the Dingle Peninsula coming from the direction of Limerick.  Tom Crean opened the pub in 1927 and ran it until he died in 1938.  It is both a beer pilgrimage and a worthy lunch stop for anyone else just for the historical value.

The pub serves the Tom Crean’s Irish lager brewed by the Dingle Brewing Company and also sells bottles of Expedition Ale by Killarney’s Torc Brewing which has the classic image of Tom Crean on the label.  The interior is covered with memorabilia, old photos and books, newspaper clippings, and various other curiosities including a small wooden door which simulate the sights and sounds of a blizzard when opened.

Just up the street from the Dingle city center on Spa road is this small brewery which does have a visitor center, but was closed for renovations during my visit last weekend.  They are responsible for Tom Crean’s Irish lager, which happens to also be the beer served on Ireland’s national airline, Aer Lingus.

At some point on the north side of your journey around the Slea Head Drive loop, you will pass this isolated brewery and pub.  Run by Adrienne Heslin and Paul O’Loingsigh, this is the place to come on the Dingle Peninsula for craft beer.  At this pub, go for something on tap and something dark.  During my visit I had the Black Elder and the Winter Ale.  I gave both over 4 stars (out of 5) on Untappd.  Adrienne and Paul also run a nice blog. The Dingle Distillery sits on the west end of the city just before the intersection where the Slea Head Road loop begins and ends, so it is impossible to miss.  Currently the distillery produces gin and vodka which can be purchased in the city center at any supermarket.  However, signs all over the city are announcing the new whisky which will be released in November 2016, however to my chagrin, about 2 weeks later than my visit.  There are two tours at 2pm and 4pm.  Book early.  Even in the down season it seems time slots can fill up. Out of the few pub restaurants I experienced during my two visits to Dingle, Marina Inn had the best combination of craft beer selection and quality food.

A former leathermaker’s shop, Dick Mack’s is a step back in time.  About half of the small bar is still kept looking like the original leather shop while the other half displays their impressive array of whiskies.  During the summer season, they still make some leather products to sell to tourists.  But the main reason to visit this pub is for the atmosphere.  Small, cozy, and historic.

Even after two visits, I still feel like there is more to experience in Dingle.  I have still to visit the Dingle Brewery Company and there are several more pubs that are worthwhile as well.  The second highest mountain in Ireland, Mount Brandon, is on the peninsula and there is an 18km hike called Cosán na Naomh (The Saint’s Road) which leads to the foot of the mountain.  It looks worthy if you don’t mind tiptoeing around cow and sheep dung and getting right into the heart of the beautiful landscape.  Since Dunmore Head and Waymont both face west, the possibility of capturing a great sunset exists.  There are also boat excursions to the Blasket and Skellig Michael islands.  For me, I am sure I will be back for a third visit in the future. 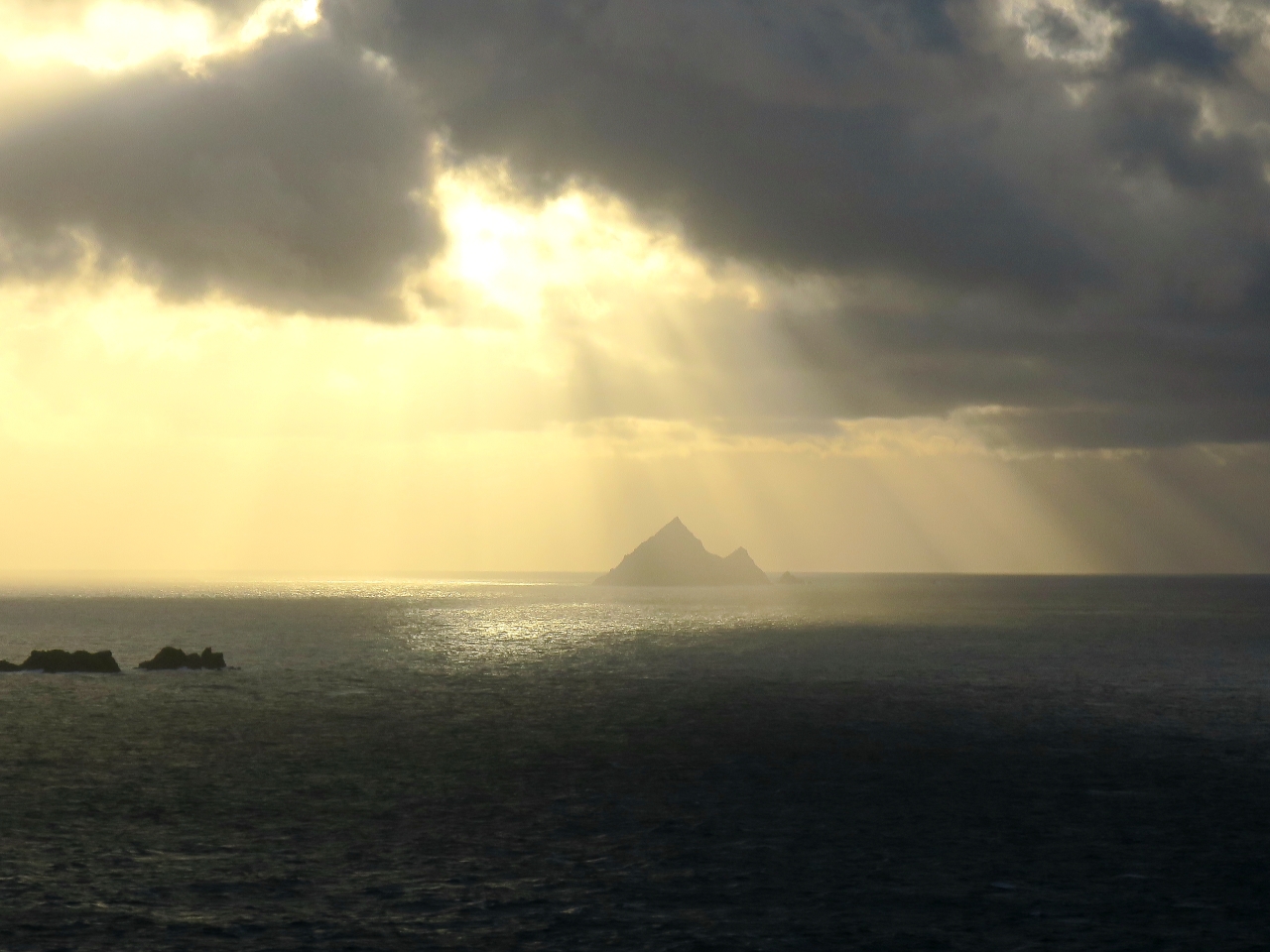 Skellig Michael island during an almost sunset (from Waymont)