If the go to Essen, Germany, there are really only two things you need to know.

One, what the initials RWE stand for, and

Two, that Stauder beer is considered “The best beer ever!” by the locals. 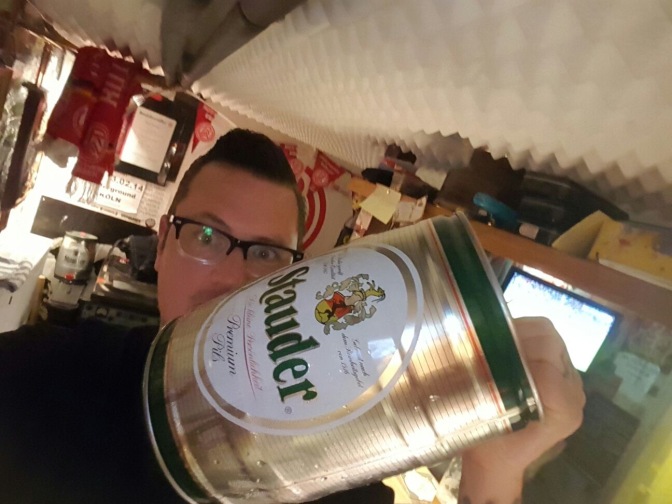 The first one is easier to explain.  It stands for Rot-Weiss Essen, the name of the local fußball team, battling it out in Germany’s , , , 4th division Regionalliga West.

The second is representative of both the good and less good of the German beer culture.  Germans love their beer.  People outside of Belgium and maybe the proud Czech Republic, think of Germany as a great beer country.  Why not?  Germany is known for its beer and deserves its reputation as a top beer destination.  The words German and beer are almost synonymous.  But because of the strict beer making regulations called Reinheitsgebot, the variety of beer in Germany is very slim compared to other countries.  Each city and region has their own major commercial beers, most of them are pilsners and weissbiers.  Essen has Stauder. In the German beer culture, you better think the local pilsner is the best beer ever.

There is another reason why RWE fußball fanatics consider Stauder the best beer ever.  It is a major sponser of the team.  Fußball and beer.  Beer and fußball.  Inseparable in the minds of the Esseners.

When I was invited to a bike ride and BBQ with some German friends and colleagues last weekend, I knew Stauder would flow like the river Ruhr.  Other countries may have stronger beer in terms of alcohol content, but I’ve never had a more difficult time keeping up with the consumption of adult beverages more than when I am with Germans.  They seem to take pride in pounding down endless liters of pils and topping that off with various sweet liquors.  It is of course a German who taught me the benefits of the Counter Beer, the wholesome breakfast drink needed to ward off the impending nausea of a rough night of German-style debauchery.

Anyway, before exposing my senses to the German drinking habits, we had to burn off some calories to make room for the ones that several Stauders would later put back into our systems.  It was a beautiful Saturday in the Essen area and a 70km bike ride was planned that would loop around to the neighboring city of Duisburg and back.  The ride would take us along several lakes in the area and an airfield which will be home to the Essen Oktoberfest in a few weeks (yes I am going!). 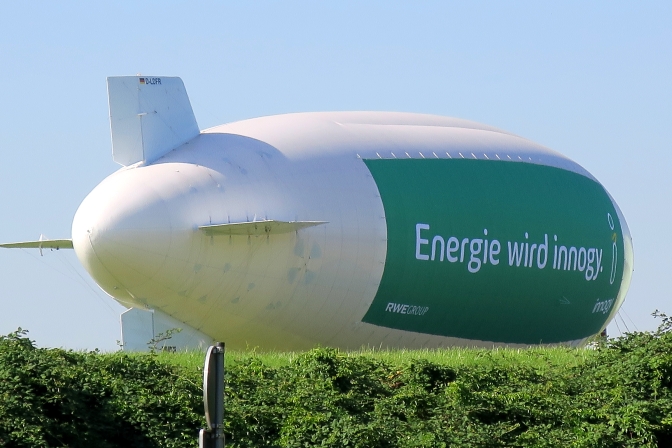 Being disciplined on a beer and bike ride is imperative to keep the legs going on any ride of more than say 40km especially in the hot weather.  So it wasn’t until kilometer #70, we finally stopped at a clubhouse along a lake and there I had my first Stauder (and surely not my last) of the weekend.  German pilsner on a hot sunny day after a bike ride is enough to tempt one to look your German friend in the eye and with pure sincerity tell them it actually IS the best beer ever.  Look at the picture… so cold, beautiful, a nice head of foam, and sweat glistening on the side of the glass.  Of course outside of those few minutes of consumption, it is NOT the best beer ever, but while the fresh, cool liquid was in contact with my mouth, I could not offer any debate. 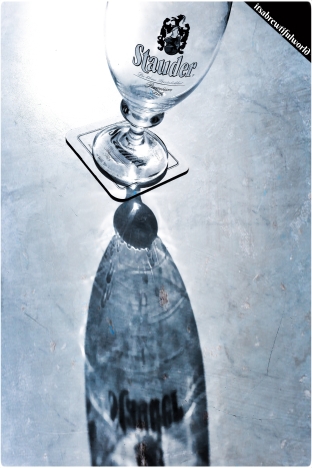 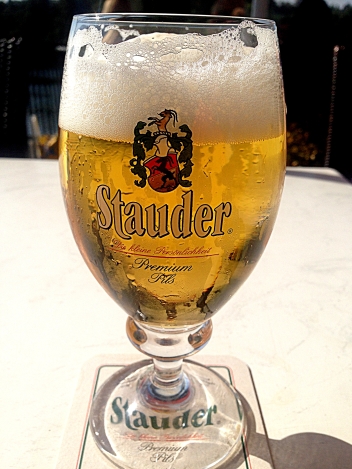 While ultimately I did not find Stauder to be the best beer ever, the enthusiasm and comradery of my Essen friends mixed with the crisp perfection of a Stauder pils made it a beer pilgrimage to remember

Throughout the weekend there were opportunities to have other types of beer.  A trip to a local beer shop gave us an assortment of new beers, including this Störtebeker Weizen.  A Frankenheimer Altbier was a tasty accompaniment to a laidback Sunday afternoon at the Kupferdreh Stadtfest, an Essen neighborhood festival.