Having Beers With the Father of Europe

Back in the 1950’s, six European countries got together and formed the European Economic Community, the precursor to today’s much larger European Union.  Those countries were France, Belgium, West Germany, Luxembourg, Italy, and the Netherlands.  About 11 and 1/2 centuries earlier, these same territories formed a different unification, known as the Holy Roman Empire.  The first emperor, who was King of the Franks and later nicknamed the Father of Europe, was Charles I, better known as Charlemagne.  On Christmas Day in the year 800, this empire was formed when the Pope crowned Charlemagne as the Holy Roman Emperor, uniting these countries for the first time since the fall of the Roman Empire in the late 5th century.  The duty of the Holy Roman emperor was to defend the Pope and Christianity. Charlemagne as depicted in the Renaissance holding the Aachen Cathedral

No one knows where Charlemagne was born.  The leading candidate, which should be of interest to Belgians, is the city of Liège.  But history is absolutely sure about where he is buried (well mainly).  There are 206 bones in the human body.  Of Charlemagne’s 206, 94 of them are contained in a sarcophagus in Aachen Cathedral in Aachen, Germany.  The rest of his bones were scattered around Europe as relics. The city of Aachen is a modest 2-2.5 hr train ride from Antwerpen, depending on whether you take the Thalys or local trains.  Frankly the 20-30 minute difference doesn’t seem to make the higher cost of the Thalys worth it.  The last leg of the journey is a short 14-minute ride from the Belgian border town of Welkenraedt.  So Aachen is very close to Belgium yet feels totally German.  Suddenly people are sipping weissbier from tall glasses, colorful bakeries populate the city streets with visual and aromatic splendor, and price tags on average consumer items look remarkably smaller.  Germany is an amazing country.  When I visit, I simply want to eat, drink, and buy everything I see.  With all due respect to Belgium, Germans know how to tempt the senses and they do it better than anyone.

Aachen is the city of Charlemagne and everywhere you go, his KaRoLuS emblem with the letters K, R, L, and S making the four parts of the cross and the vowels combined in the center, appears everywhere from small placards on the street to caligraphy on the walls.  Belgian beer lovers should not confuse Karolus with the beloved Gouden Carolus or Keizer Karel beers.  Those refer to Charles V, the Holy Roman Emperor in the 16th century. As mentioned, the majority of Charlemagne’s bones are contained in Aachen Cathedral, the centerpiece of the city.  The cathedral was begun in the same year as Charlemagne’s coronation and has undergone many changes in its 1200 year history.  The interior has an impeccable Byzantine appearance with exquisite mosaics, marble, and gold.  These decorations mainly come from the late 19th – early 20th century.  Despite the relative modernity of the interior, it is one of the most beautiful in all Europe and this fact doesn’t take away from the feeling of standing in history.  And stand in history is what you will do when you take the guided tour.  This is the only way to visit the upper level where the throne of Charlemagne sits.  But for English-speaking people, be prepared – the only English tour is at 2:00pm each day. 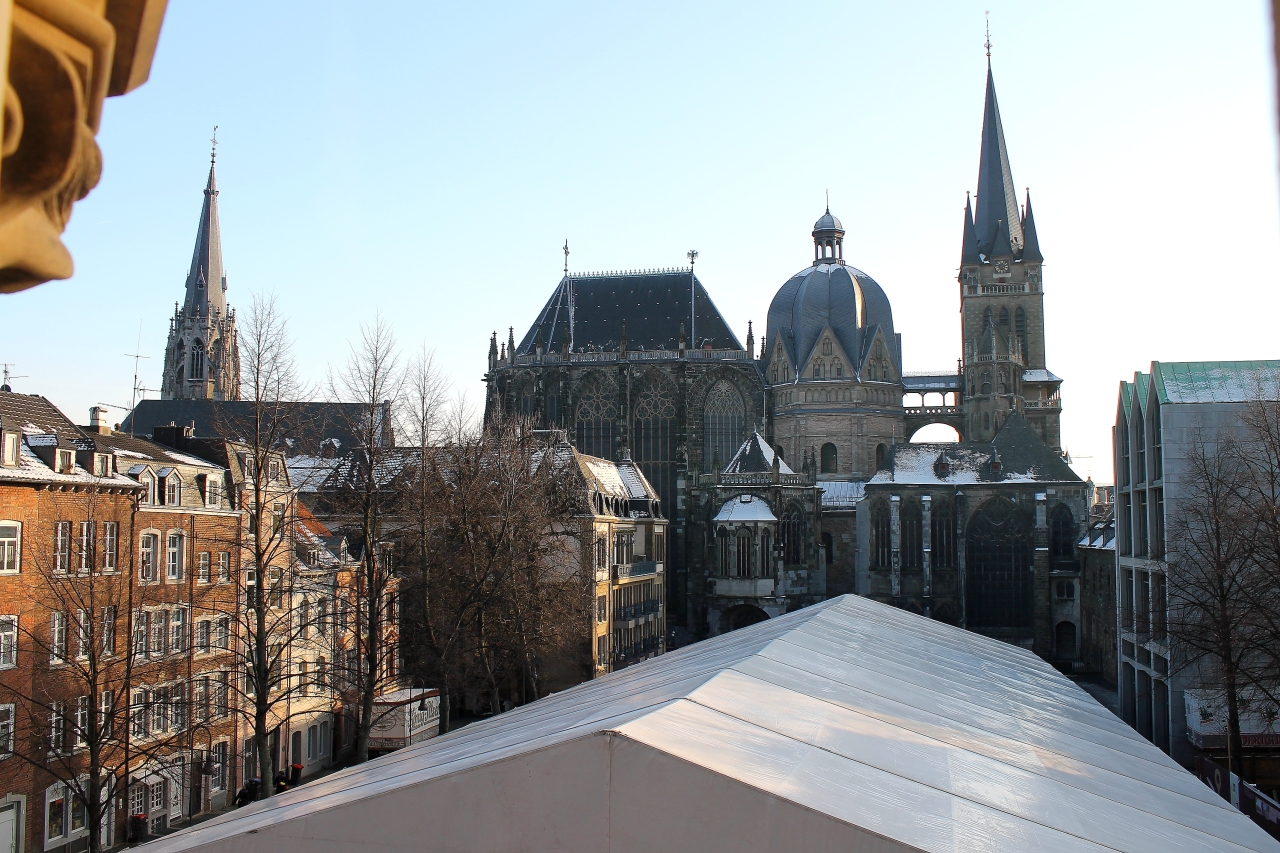 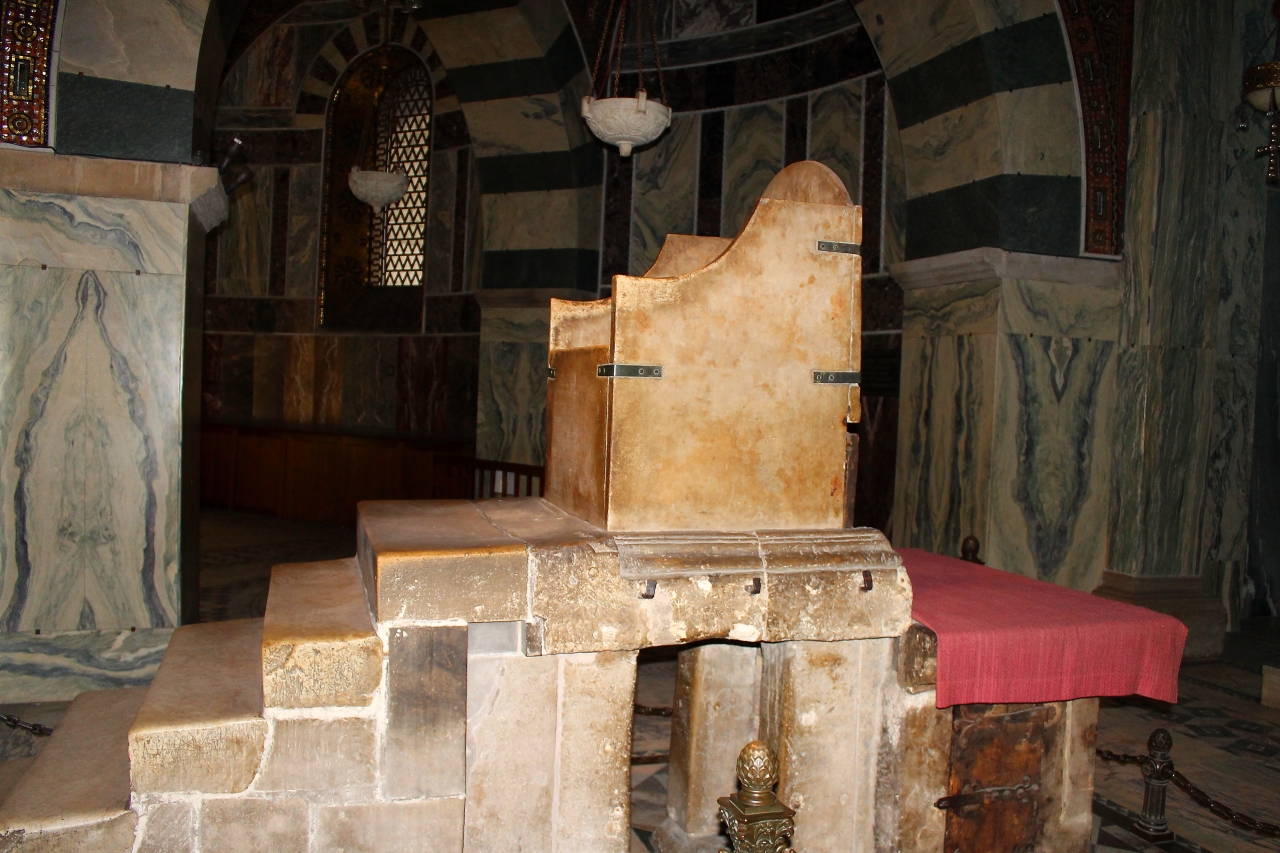 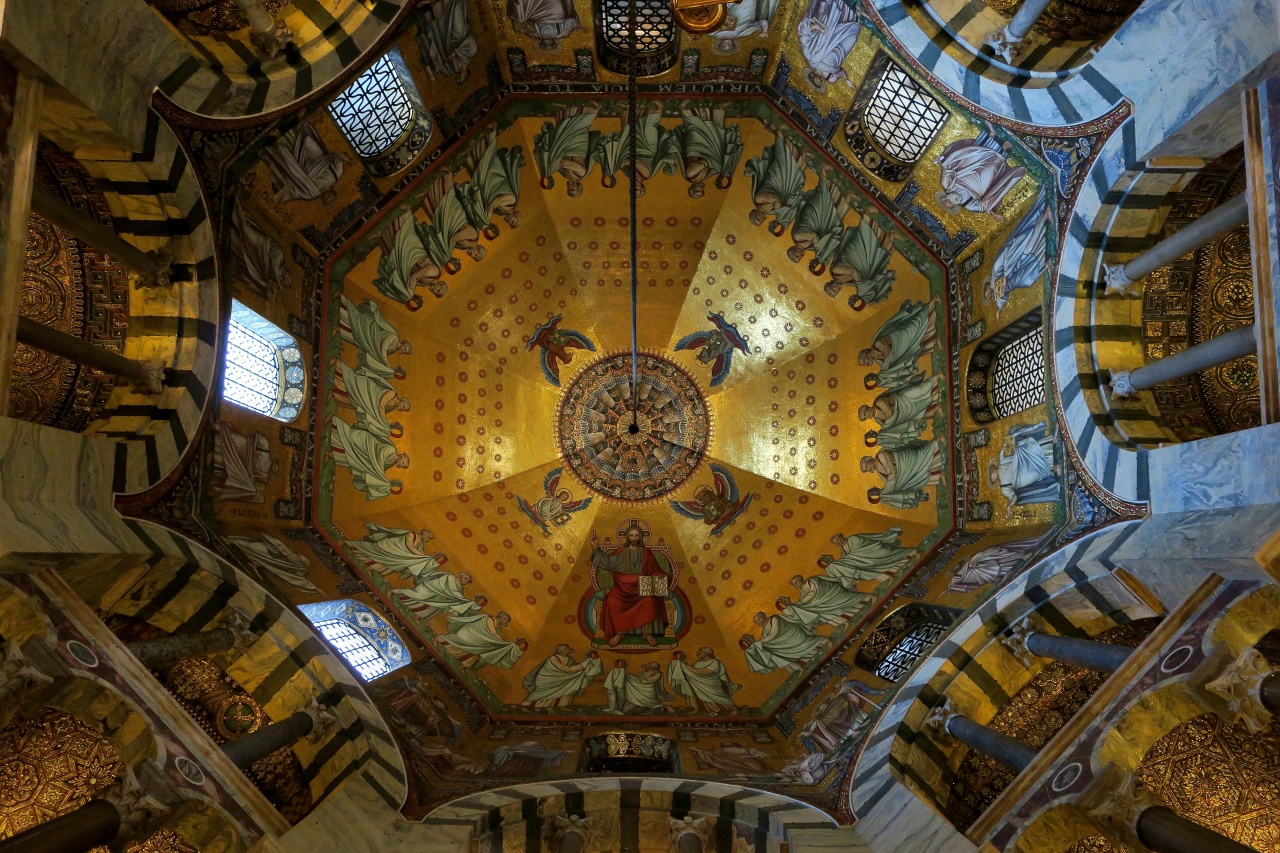 Just a short distance away from the cathedral entrance, opposite the Dom gift shop, is a great lunch and beer spot, the Albrecht Dürer Stube, named such because it is believed the famous artist stayed here when visiting the city to appear before Charles V in 1520.  I have had lunch here twice, experiencing it both in the cold of a February winter and the warmth of an August summer.  As with most German restaurants, the beer selection will not give you a long list of beers like in Belgium.  During my first visit, I had the Öcher Lager and a Bitburger.  Four and a half years later, I found those same beers on the menu.  But there advertised on the wall was a list of four new ones from a local brewery called Cornelius-Brau. There is not much information about them on their website but I tried both the Opulentus (dark) and Sanctus (blond). Both were surprisingly Belgian-style beers and not the typical German pils or dark lager that one comes to expect in Germany.  By the way, great turkey steak and bratwurst here. 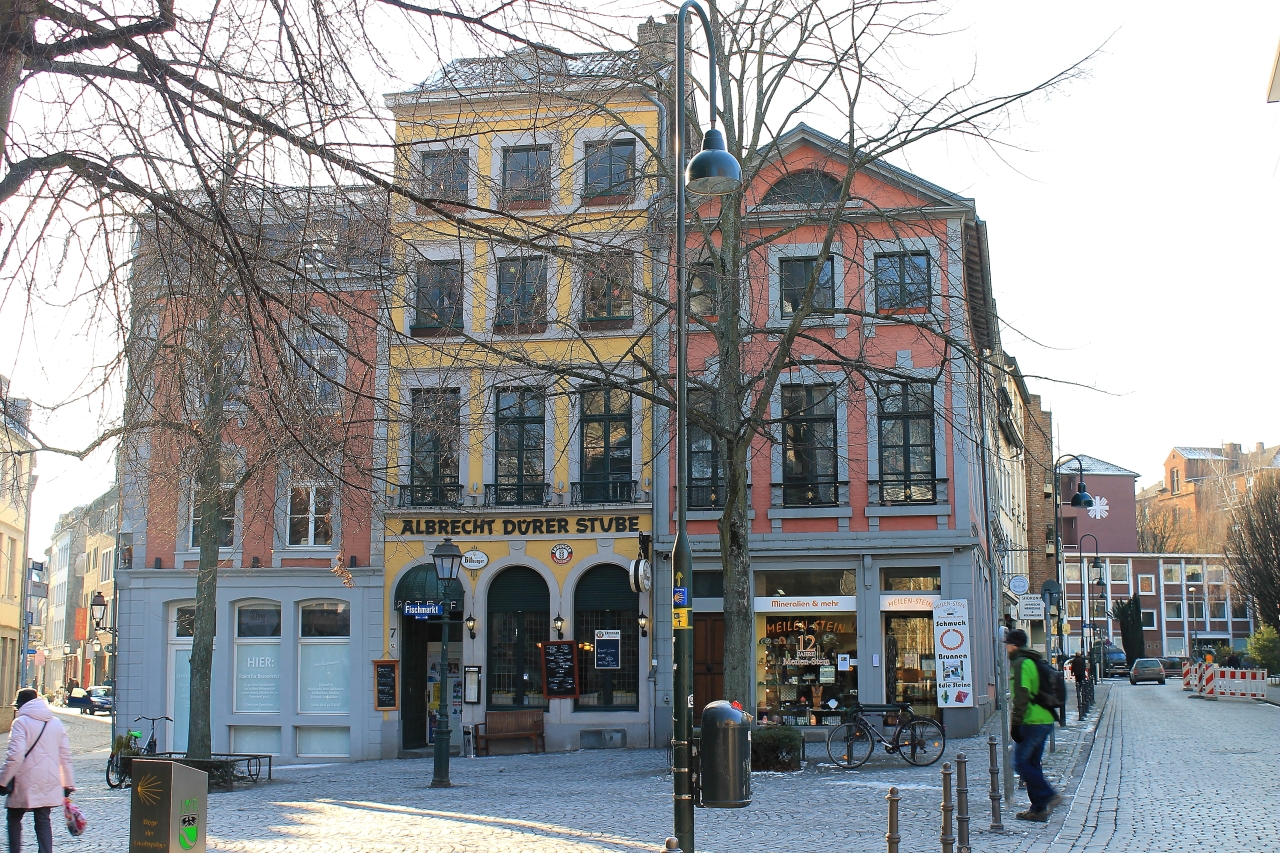 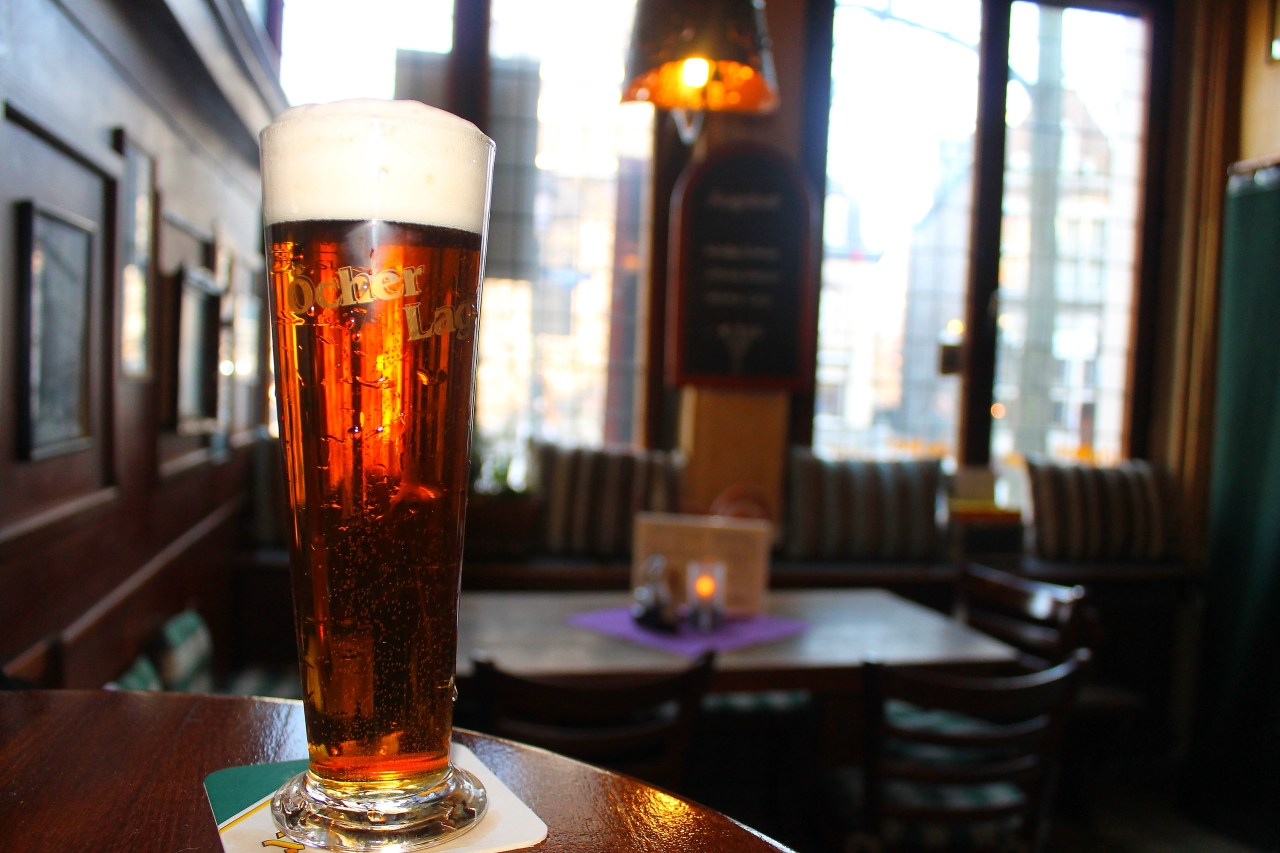 It was not surprising as I toured the historical city center that the beer selection did not offer a lot of variety.  It is my experience with Germany that you typically find the beers of the region along with the more commercial ones.  Since Aachen is close to Cologne, there are many Kölsch beers.  I had a Sion Kölsch at the Ratskeller, a medieval-style pub attached to the Rathaus or City Hall, which by the way is reminiscent of the Neues Rathaus in München and full of neo-gothic glory. 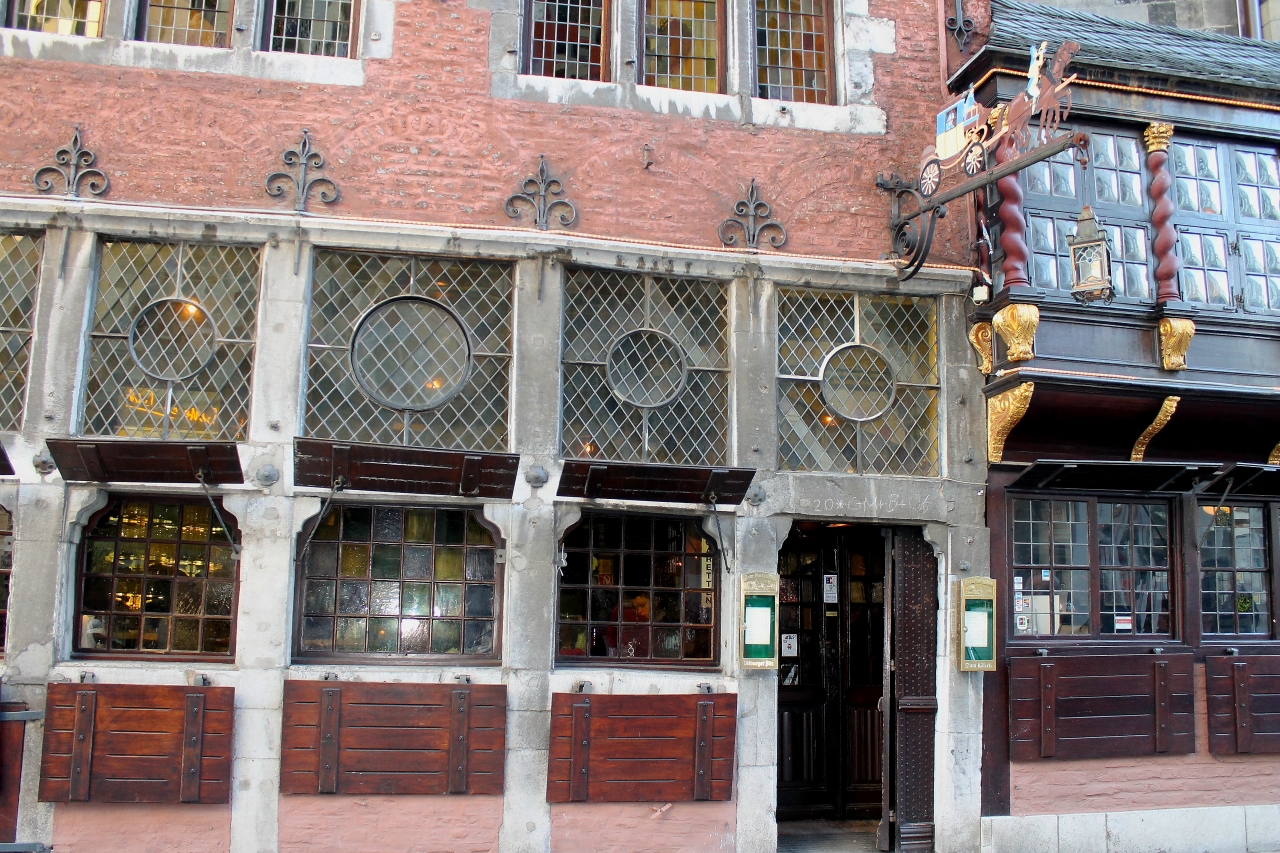 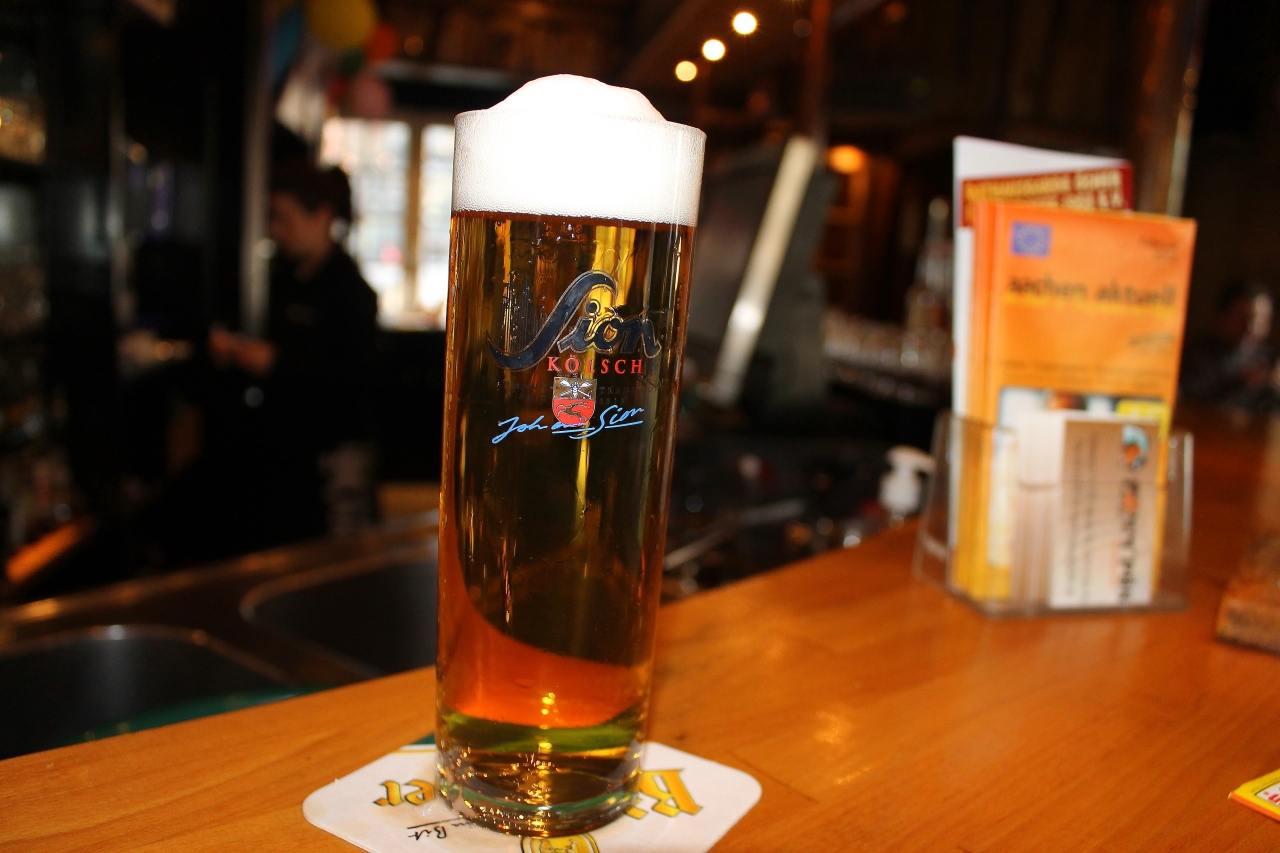 Sion Kölsch at the Ratskeller

The other great place for a beer is the Aachener Brauhaus.  This is probably the first pub/restaurant that you will notice when you reach the historical center from the train station.  Don’t let the noisy street fool you into thinking it is a low-class tourist trap.  It has great traditional food.  But again, if you’ve been to other pubs in the city center, most likely you will not find something new.  I settled for a Warsteiner, a quality pilsner which I’ve had many times in the USA, but for the first time here on German soil. 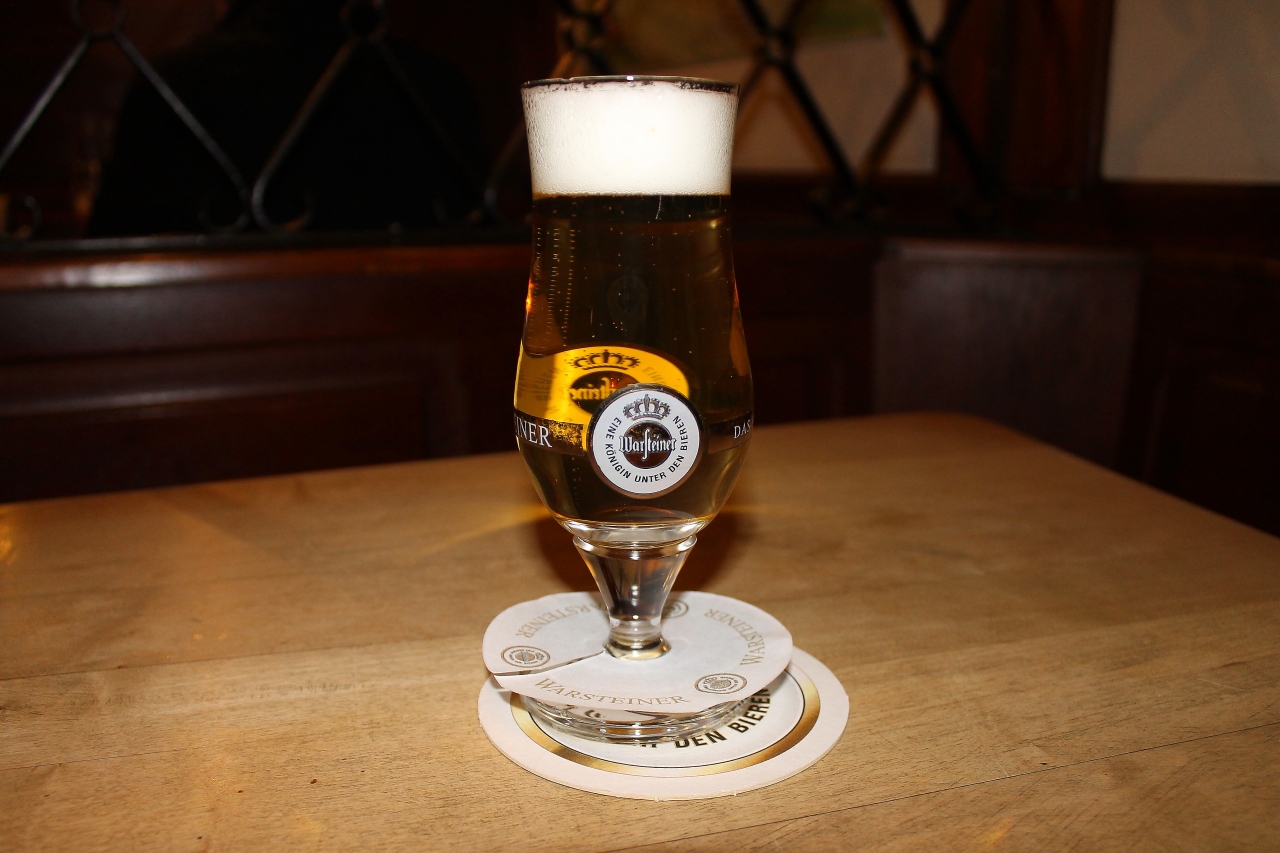 Warsteiner at the Aachener Brauhaus

Aachen is not a place that will find it’s way onto most tourists itinerary.  Nearby Cologne is much grander and has the Kölsch beer to make it a must pilgrimage.  The main attraction of Aachen is Charlemagne and the beautiful cathedral and that will appeal to history buffs, but otherwise it is mainly a very worthwhile day trip for those living within a 3-hour train ride.  Frankly speaking (forgive the pun), I feel very lucky to be able to visit and enjoy a few beers to celebrate the current version of Charlemagne’s empire in the very city from which he ruled and (mostly) lays at rest.